A Cloud of Witnesses

“Mama (Jessie May West Evans) was born on October 5, 1895, on a small farm near Durant in Holmes County, Mississippi. Her parents were Thedorene Chavis West and Anderson West. She had an older sister Olive (‘Big’) and a younger brother T.C. (no name, just initials). She went to a small country school and always told us she learned to read at age four. I don’t think they had twelve grades of school in Durant, but she did attend high school there before going on to Memphis to take a business course at Macon-Andrews Business College.

“Big had moved to Greenwood and in 1913 Mama too came here and worked as a secretary for Barnwell and Ashcraft Insurance Agency. She married Daddy in 1916. [Ed. note: They were married in the still-extant sanctuary of First Methodist Church, Greenwood]. 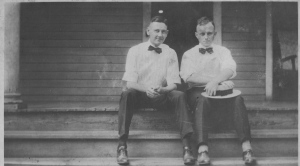 Howard Evans on the right, probably at the Buckeye

“Daddy (Howard McTyiere Evans) was born on June 28, 1894 at McNutt, near Schlater, Mississippi. He was born in the Old Court House which was being used as the Methodist Parsonage at the time. Daddy  had reddish curly hair and a stocky build. He was not very tall. He was a sweet, affectionate person who loved people. He liked politics, though he never ran for an office, and he liked conventions and parties and social life, none of which interested Mama. He liked to hunt and fish and go to the Elks Club to play cards and the Country Club to play golf. He liked baseball games and prize fights and was a ‘man’s man.’ He had many friends of all ages and was a very good businessman, highly regarded in the cotton and oil mill business. He had moved around a lot when he was a boy because his father was a minister, and Methodist preachers were never allowed to stay in one church for very long. He was graduated from Coldwater High School and attended Millsaps College.”

I am writing these blogs about Sara because “who I am” is so inextricably tangled with “who she was.” And so it goes with each generation, a fortunate and treasured strand for many families (ours included) and a never-ending curse for others. My mother was interested (but never obsessed) with genealogy and lineage and she credited her grit and penchant for adventure to her forebears. So, in order to move her story forward, we have to backtrack just a bit today and get a grip on her parents, my maternal grandparents, Jessie and Howard Evans. One is a cherished, warm memory and the other a shadowy figure of familial legend and lore.

Jessie West Evans, as I knew her, was God’s original template for grandmothers. Soft and slow-of-foot and quiet, always quiet, a gentlewoman in dark blue Keds surrounded by old furniture and hyacinths and Pond’s cold cream and a little bedroom TV that only received three shows: Lawrence Welk, Gunsmoke and As the World Turns. She adored her eight grandchildren without reason, but we all knew from the cradle not to call her on Saturday or Monday nights until Lawrence had blown the last bubble or Miss Kitty had locked up the Long Branch for the evening. She had Barrett’s Drug Store deliver gallon-size jugs of Pepto Bismol and Milk of Magnesia on a frighteningly regular basis, and some magical mixture of those two kept her hopping along well into her 80s.

Those are my memories, circa 1960. In Sara’s earliest mind, Jessie was a young housewife whose childhood Sears Roebuck paper dolls had come to life in her first three children, little stair-step girls with barely three years between the first birth and the third. Sara believed that if the first offspring had been a boy, Jessie would have just withered away with disappointment and none of us would have been brought into this world. She loved tiny girls and tiny clothes and tea parties and lemonade stands and all things frilly, and she doted on Tiny, Mamie and Sara in a fashion that was probably unhealthy by anyone’s standards. But in doing so, she shaped three lives that were full and confident and a gift to the next generation. Two more children, Son and Tricia, were yet to come and equally cherished, but you’ll have to be patient with the glacial pace of this blog to get to them.

So, here we have Jessie, known and revered and heavily documented in our memories and our hearts. Howard, my grandfather, is an enigma. He was gone in 1932, only 38 years old, the victim of a tragic incident that haunts us all down through the generations. But from 1921 to 1932, he was, in Sara’s reminiscences, a dashing figure……Handsome, successful, proud of his noisy houseful of girls and steadily climbing the corporate ladder at the Buckeye Cotton Oil Mill. In the faded photos of that day, he faces the camera dead-on, intense, with a spark in his eyes that suggests secrets and humor and a confidence that probably got him in buckets of hot water.

I can sense his presence even today when I pass that old house on Strong Avenue, the one he fashioned and built and took such pride in.  But it was in the Elks Club, now under renovation on Washington Street, where he all but reached out and touched me, three-quarters of a century after his death. I was wandering through that grand old hulk a few years ago, stunned by the craftsmanship of its woodwork and mantels and lighting, when I came into the main parlor. The Stickley chairs from the 1920s were still there, a fine layer of dust on their arms and cushions, facing the fireplace. It didn’t take an overactive imagination to pick up the odor of fine cigar smoke and the sound of laughter after a slightly ribald joke. Some essence of generations of Delta men lingered in that eerie room and my own DNA locked in on my grandfather’s, with his hand of cards and probably a half-empty whiskey glass and his plans to walk on back down Strong Avenue in just a little while, just a bit longer, to his waiting girls. It wasn’t a frightening feeling at all, more of a reassurance, an affirmation that this family, mine and his, had somehow discovered its proper place in the universe.

Unless you’re fortunate enough to be part of this clan, that’s likely more than you need to know about Sara’s folks. We’ll move on with her story tomorrow, if her great-granddaughter Charlotte will allow me the time and attention that this requires. For those of you who are more interested in Greenwood than in our family, I’m going to try to include some architectural and social history at the end of these blogs, when appropriate. See below.

Ed. Note: The Old Court House at McNutt was the Sunflower County Courthouse. Prior to 1871, the western section of Leflore County was part of Sunflower, and the county seat was not Indianola, but McNutt. When the new county was carved out, its county seat was designated as Greenwood and a new courthouse was built there, just northwest of the 1906 Leflore County Courthouse that we know today. Sunflower had lost its county seat in the drawing of the new county lines and the new one was Indianola. McNutt, which had several stores and churches along with the courthouse, dried up and disappeared. Only the cemetery, one of the loveliest in Mississippi, remains.

The Elks Club was built in 1912 on the site of the Selliger House, which was moved to another location on Main Street. R.H.Hunt, who had designed Davis School, FUMC and the Leflore County Courthouse, was the architect. For most of the twentieth century, it was the downtown meeting place for Greenwood’s leaders and businessmen, but membership dwindled dramatically in the late 1900s. It is now owned by Viking Corporation and is undergoing extensive renovations.