“There was a porch across the front of Whitfield School where we played when the weather was bad and when we were waiting for the school bell to ring n the morning. We were always there early because Mama believed in being early for everything. At school, Sunday School, birthday parties. We were the first to get there and the first to leave.

“I had a lot of friends at Whitfield, and we visited each other a lot since all of us lived fairly close by. My best friend was a girl named Marjorie Wilson. Another was Leota Taylor, whom I visited many times in later years. 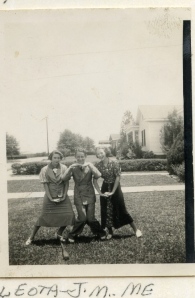 Leota Taylor, someone identified as "J.M." and Sara, clowning around ten years or so after their Whitfield days.

Others were Ella Dee Lamb, Ethel Powell, Katherine Swanner, and some whose names I do not remember.

“Each year I picked out a boy friend. One was Jack Baliff, who lived six months of the year in West Virginia and six months in Mississippi. He wore argyle sweater with matching socks and knickers and was so cute. His mother was very talented and was always bringing little favors and cookies to school for us. One time she had made all the girls little dolls with a cupcake for their skirts and beautifully decorated. I used this idea for one of Cathy’s birthday parties. I think Mrs. Baliff was my inspiration for many of the cakes and party favors which I later attempted.

“I lost track of Jack Baliff in later years, but then somewhere along the line he showed up again, and we dated a few times and corresponded when he was at the University of West Virginia. He joined the Royal Air Force during World War II and was killed.” 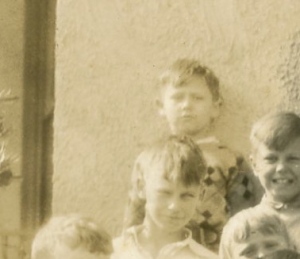 Jack Baliff, standing in the rear, age 9. His face just doesn't want to come into focus.

Those 2 1/2 years at Whitfield School come across as some of the happiest of Sara’s life. I think she always felt a bit lost and overwhelmed by Davis School in Greenwood, which is understandable when you look at the pictures of that monstrous (but endearing) building. Whitfield was like a tiny gem, with only 6 classrooms and a warm, welcoming visage. Where Davis had a soaring three-story tower that just begged for stories of recalcitrant children locked in the attic, Whitfield sported a friendly domed bell tower and a breezy front porch, perfect for hopskotch and jumprope. And the bathrooms, I assume, were logically placed between classrooms, as opposed to Davis’ notorious basement facilities, which endangered Sara’s renal health for years. In the class photos, she looks confident and sure of herself, a good student and good friend with the whole world of Jackson, Mississippi, on her plate.

Ed. note: I never met any of these Whitfield friends except Leota Taylor Williams, who remained close to Sara until her death. Leota’s son, Bill Williams of Raymond, was a good friend of mine at Mississippi College, and I would often see Leota visiting with him on campus. She was kind and thoughtful and a welcome reminder of my mother during those early homesick days at MC.