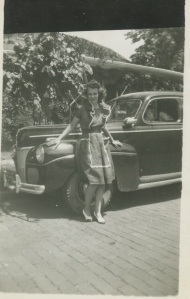 Sara in front of the Stott house, which may have been a safer place to meet dates than inside.

“Having a date was not always easy at the Stott house. Bama would stay dressed and take her seat in the front hall or on the porch in the summer to wait until a date arrived. Often one of the neighbors might also be visiting when they arrived, and you had to make introductions to all of them. On the other hand Mama was most often not dressed and had closed up in her bedroom to read and would not come out to meet them. I am sure some of the boys thought either that we did not have a mother or that there was something wrong with her.

“Big, who usually went to bed anywhere from six o’clock on, might think of something she had forgotten to do and come parading down the hall in a thin nightgown. Mama had told us not to go in the kitchen at night because we might wake someone up, so that made it a little hard if your date asked for a drink of water.

“One night I had a date with a boy named D.T.Francis, who fortunately was just a good friend and someone I was certainly not romantically interested in.

D.T. Francis, who received an unexpected gift at the Stott house

One of the neighbors had called Big to ask if she had a bedpan they could borrow. The doorbell rang, and before I could get to it Big met D.T. and handed him the bedpan. Another time Tiny came in with a date and on the porch stumbled over a drunk man passed out on the floor. His last name was Evans and someone apparently directed him to our house, thinking he belonged there.

“Another time, trying to show my manners, I asked Tiny’s date to ‘sit down and come in.’ Some of the others heard me and teased me for a long time, asking me how he was supposed to get the chair in after he sat down.

“Mama would caution us not to stay up too late with a date on the porch glider because Big was in the habit of getting up at all hours and she might appear in the nightgown. Whenever we got in from a date we had to go in Mama’s room and over to the bed and tell her we were in, so there wasn’t much chance of us staying out past our deadline.”

Would you risk coming in late to face this mother?