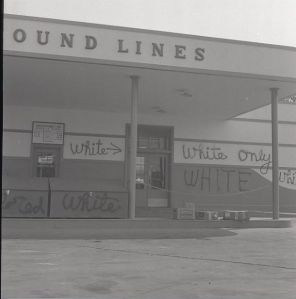 “The Greyhound Bus Station was another target when they did away with their segregated waiting rooms. The station, across the street from City Hall, had paint splattered on it in the dark of night, and on some occasions spray paint was used to indicate they were ‘n—–r lovers.’ De La had let it be known how he felt about the bus station’s policies.

“At one point the City Council passed an ordinance providing that where the Chief of Police considered a situation to exist or to be developing that might lead to a breach of the peace, he might close the place and require everyone to leave. This ordinance was passed on a Sunday afternoon at the height of the Leflore Theater trouble. It provided that should a situation exist on the streets, on the sidewalks or at any public place, or in a store, place of amusement or recreation or in any other business or establishment open to the public ‘which existing or developing situation is likely to lead to a breach of the peace, the chief of police can require all persons in the public place or area to leave and can require the store, place of amusement or recreation to close.’