Just a few days after Sara’s 95th April Fool’s birthday, it’s time for a bungalow-to-cabin update. There she is, second from left, with Mamie, Tiny and a neighborhood buddy. Looks like they’re all in homemade outfits, on a spring or summer day, posing for Howard’s camera. I don’t know anything about their little friend’s later personality, but the Evans girls are already showing their adult quirks. Mamie looks like she’s going to burst out laughing at any moment, Tiny is intense and obviously the one in charge, and Sara finds the whole moment just a bit ridiculous.

The critical detail in this photo is just to the girls’ left. That odd white structure in the brick porch wall is a concrete downspout, one of two that were inserted in the wall when it was built in 1922. Their intended purpose, I’m sure, was to carry rainwater away from the porch floor, a clever device that I’ve never seen anywhere else. But it was their unintended use, dreamed up by swimming pool-averse Jessie, that made those downspouts a must-salvage element for me as we demolished the bungalow. One of my favorite Sara stories was her recollection of sizzling summer days on Strong Avenue, when Jessie would plug up the downspouts and flood the front porch with the garden hose. The girls could splash and spray to their hearts’ content and then Jessie would pull the plugs away and let the water drain off into the flower bushes. Having lost a younger brother in a Moon Lake drowning incident in 1919, she kept her flock as far from pools and rivers as possible, and this was her one concession to children’s natural attraction to aquatic play. Sara never forgot the fun of those days, but she also never learned to swim.

We had exceptional brick masons working on the new cabin at West. They took those thousands of thick, solid brown and white bricks and recreated the look and feel of the bungalow with amazing skill and craftsmanship. When it came time to build the “bungalow porch wall,” I showed them the downspouts and where I wanted them placed. Mr. Steelman scratched his head, took some measurements, and said, “We can  do it, but they’re not going to be open all the way to the back side,” giving me one of those “Uh, oh, crazy woman with nutty demands developing here” looks. I told him that the back side was irrelevant, but I wanted to see those downspouts poking out of that wall every time I drove up to the cabin. And in they went. That’s the west side, and the other is just around the corner on the south side.

We only get out to West about once a week, so there’s always a surprise waiting for us as William Buckley’s crew takes parts of one old house and creates a new one. Most times I just wander and stare and marvel at their work. But sometimes I get downright teary as I watch the bungalow bits come back to life. The first glimpse of the downspouts was an emotional moment. The next will probably be on the day we walk down the hill and see this century-old door in place. 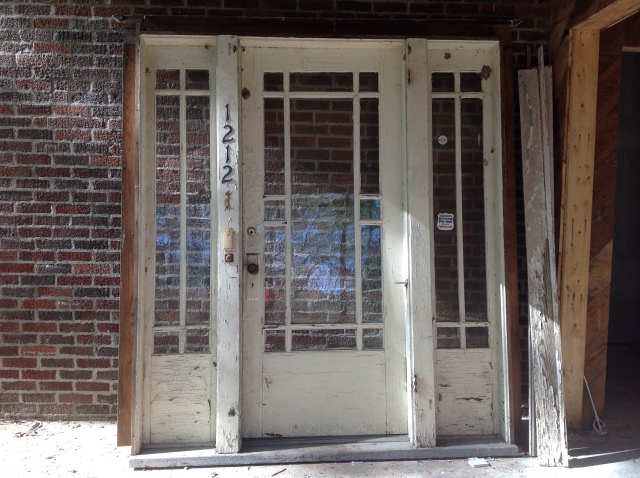 I cherish this entranceway as much as any part of this unusual puzzle. When I would peer through it on Strong Avenue, it was so easy to imagine small girls peeking out, waiting for their dad to come driving up or watching for friends who might drop by. I picture my grandparents, keys in hand, unlocking the door for the very first time into the only home they would ever own together. I can see Christmas wreaths and lace curtains and smudged little fingerprints on the glass, all part of the life that Sara’s family lived there from 1922 to 1929. It is truly an opening into a lost world, a reminder of such a brief time that meant so much in the lives of all those children.

Mamie, Tiny and Sara on the bungalow steps. The door behind them was painted a dark color and had a screen door in place at that time. The screen door is at West, as well, and will anchor the entrance to the screened porch.

2 Responses to Bits and Pieces