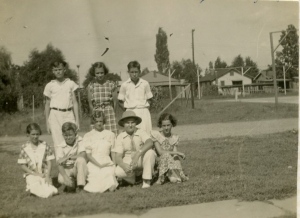 “My close friends that year [1932-33] were Mary Charlotte Clarke, who is still a very close friend, Elizabeth Ann Colvard and Mary Hayes Crow. We played together, and went to each other’s houses, and skated together. Elizabeth Ann’s father, Mr. Colvard, had a bakery, and we liked to go there to get butter cookies after school or down to the Greenwood Grocery where Mr. Clarke worked to get candy. Mama would never let us have much company at home because she would remind us that it was not our house and that we might disturb Big and Uncle Roy. Of course, there were so many of us that there really wasn’t much room for anyone else.

“Spot [Pettey] asked me to go to the picture show one Saturday. His mother came by and picked me up. When I got home I had a high fever and was coming down with the flu. All of the older ones teased me and said my first date had given me fever. 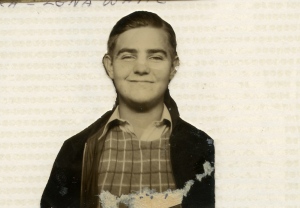 They would tease me about everything. Mama always said it was because I was good natured, but I wasn’t at all sure that was it. It was not always easy being in the middle with four older and three younger.

“I remember Mama called Barrett’s Drugstore and ordered a jigsaw puzzle for me when she found out I was sick. They had just come out in Greenwood, and, like the yoyos, everyone was buying them. They started having jigsaw parties. They would have several card tables set up with a puzzle on each table, and the group that finished theirs first won the prize.”

Sara’s life had changed dramatically in the early ’30s, as had her entire family’s, and times were not easy for anyone at 115 East Washington. But she was a resilient young lady and she found support and encouragement (along with a lot of normal sibling hassling) in the company of friends. These photos are from a marvelous small set of snapshots, probably taken over one weekend when one of the “gang” showed up with daddy’s camera. They capture a youthful camaraderie and hopefulness that is charming and, for those who loved Sara, reassuring. Sixty or seventy years later, she could still tell you where each of these “kids” was or when they had moved on to another realm, and she stayed in touch with as many as possible. Wouldn’t we all love to have a friend like that?

3 Responses to Life Goes On