“The clothes we wore were a lot different than those worn by children today. Little girls did not wear shorts or pants, and certainly there were no blue jeans or jogging suits. Little girls wore cuffed bloomers showing beneath little dresses with no waists. They were called bloomer dresses. In the summer we wore teddies under our dresses. These were little one piece garments, and ours were made by Mama. In the winter time we were bundled up from head to toe since they were sure if anything but our faces was exposed we would catch a cold. We wore long stockings, high top shoes, toboggans (knit hats) and union suits (long underwear). All of our sweaters were cardigans, and they were not very pretty, but being wool were very warm.

“Small children usually wore leggings (long pants) under their coats. We slept in sleepers, which were one piece pajamas with a drop down in the back for going to the bathroom. Our Sunday dresses were usually made of crepe de chine or pongee material, and we wore long socks until anklets appeared in the late ’20s.

“Little boys wore short pants and knickers. They wore caps and lumberjacks (wool jackets, usually plaid). All of our clothes had buttons or snaps. There were no zippers. Clothes were very inexpensive. The 1927 Sears Roebuck catalog listed lace trimmed baby dresses for under one dollar and a little boy’s suit for a dollar. Little girls’ dresses were around two dollars.

“Ladies wore corsets (uncomfortable laced up affairs which Mama never stopped wearing) instead of girdles. Most of the ladies’ dresses were long waisted and loose fitting and ugly. They were long (about mid-calf rather than to the ankles as they had been a few years before). Everyone wore hats, and even after we grew up we wore hats and gloves to parties and to church or whenever we went to a city. Mama wore a hat everyday going to the Red Cross to work. A lot of the ladies wore hats to go downtown in Greenwood. All of the men wore hats, too, summer and winter. The summer hats were flat straw ones, and the winter felt. They wore a lot of caps too.

“Ladies did not wear slacks or shorts, and I never remember them not wearing stockings regardless of how hot it was. The bathing suits were one piece and came down to a few inches above the knees. People were very modest in those days. Bikinis had not been designed, and the ladies of those days would have been horrified at today’s suits.” 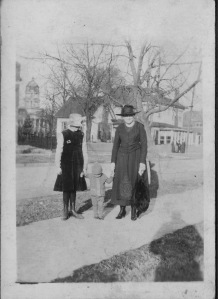 Sara was never, in my memory, fixated on clothes, other than the skill and challenge of creating them. She was a wizard with the sewing machine and spent hours every day (and she always had more hours in her day than the rest of us, usually beginning at 3 or 4 am) bent over the little Singer in the corner of her bedroom. Cathy and I had dresses galore and rarely darkened the door of Wee Moderns on Howard Street for a ready-made outfit. I can remember daily trips to Eaton’s Fabrics and the one across the alley from Chaney’s Drugs (can’t remember the name of that one, but it burned in 1966), silently cursing the Butterick and McCall’s people for making those pattern books so darned thick. Sara would be happily perched on a stool, licking her finger as she turned each page, patiently pointing out new designs. “Do you like that one? How about this one, it looks easy.” I was obnoxious, uncaring, unappreciative of the fact that I had a mother who was not only capable of creating anything she saw but who would take the time to do it. My mumbled responses would finally explode into “I DON’T CARE, JUST PICK SOMETHING.” She would raise an eyebrow (shades of Granny), smile and do just that. And I would soon wear the finished product, all those little jumpers and skirts and dirndles and, later, pantsuits and formals. She tried making shirts for Daddy, and that, as best I recall, was her only sewing misstep. Those shirts made terrific rags.

Cathy inherited the Singer gene and was proudly sent off to represent Mississippi in the Betty Crocker Homemaker of Tomorrow competition, 1969. (Sorry, Cathy, that’s just too priceless to keep under a bushel. Forgive me.) I couldn’t sew a Brownie badge on my sash, much less create a dress.  Sara sat patiently by me in the early summer of 1972, guiding me through the construction of 3 pairs of white shorts for my job as a Greenwood Parks counselor. She never fussed, never criticized, but must have known that disaster was inevitable. When my sloppily stitched seams gave way on a steamy June afternoon at Clerico Park, she laughed all the way to Walnut Street with a replacement pair, handing them to me through the cracked door of the equipment shed where I had taken cover. I don’t think any of my misadventures ever delighted her more than that. Revenge is sweet.

When my daughter was born, the Singer went into overdrive. To have put that child into all the dresses that Grandmother Sara turned out, she would have had to be changed a half dozen times each day. And probably the first time that it occurred to me that Sara was truly getting old was when I noticed that the little jobs she continued to do on the sewing machine were becoming uneven and undependable. She knew it, too, and quietly covered the old machine and moved it into the closet.

Two of her oldest Singer machines are in my storage room, survivors of the Great Estate Sale of 2009. One was loaned to the prop department for “The Help,” along with a vintage YashicaMat camera, and I hope you’ll notice both when that movie hits the big screen in August. Think about Sara when you see it, and how much she would have loved making tiny dresses for her three great-granddaughters.

Ed. Note: In the picture above, Jessie and two unidentified friends stand on the sidewalk across from the Greenwood Leflore Library, around 1920 or so. In the background is one of the few existing images of the Dr. T.R. Henderson House, on the site of today’s Big Star. Dr. and Mrs. Henderson gave the land and partial funding for the library, Confederate Memorial Building and the demolished sanctuary of First Baptist Church. The house was torn down in the 1950s. Beyond the house, the tower of the Leflore County Courthouse is visible, as is a small part of First Methodist Church.