Putting on Airs and Casts 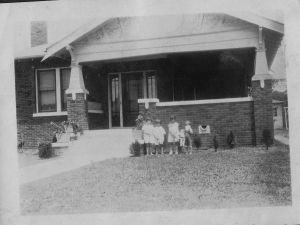 Mable Petty, Mamie, Tiny and Sara, with no broken arms

“Most of our playmates lived right there in the neighborhood or over on Leflore Avenue, which was one block away. We played a lot in the Gardner’s yard, which was a few doors down and across the street. They had four children and if anything more playthings than we did, so we loved to go over there to play. We would make roads in their yards with our tricycles, and when their daddy, Frank Gardner, built a fancy playhouse for Edna Earle, who was a year older than I, and surprised her with it when she returned from a vacation, I was terribly envious. It had two rooms and a screened porch and a stove you could really cook on.

“Sometimes the Gardners’ cousin, Ann DeLoach, who was Tiny’s age, would come down to play. Tiny was impressed with her, and when she would come Tiny would tell us not to call Mama ‘Mama.’ She wanted us to say ‘Mother” since that was what her friends like Ann called their mothers. She would say Mother but gave up finally when she couldn’t talk Mary and me out of the’Mama.’

There are Mamas and there are Mothers. This is a Mama, with Mamie.

“One day Ann was riding her tricycle over in front of the Gardner’s house when she turned over and fell on the concrete, breaking her arm. Tiny, who had been ‘felt for fever’ all her life, was very jealous since she could not imagine anything more exciting than being able to have your arm in a sling and have everyone ask you how you got hurt.

“Finally she could stand it no longer, and after snitching some of Daddy’s big white handkerchiefs out of the drawer she lined Mary, Mable Petty and me up and applied slings to our arms as well as her own. There we stood in the front yard for all to see and wonder what in the world had happened to us. The preacher had stopped over at the Petty house to see about Mr. Petty and could not believe it when he saw us until he learned there was really nothing wrong with any of us.”

Howard with his handkerchief-stealing oldest daughter, Tiny, circa 1919

I think the screenwriters for “Little Rascals” were channeling Strong Avenue in the late 1920s. And I’m going to look for that little playhouse later today.