“The ’20s brought about a lot of changes in the way people lived, and this period has been described as ‘era of the First Youth Rebellion.’ The girls started wearing shorter skirts (they had been down to their ankles) and they bobbed (cut) their hair and did dances called the Charleston and the Black Bottom. Men wore knickers to play golf. I can remember Mama saying, ‘Did you see her with that cigarette in her hand?’ when some of the teenagers would ride by to see Mable’s brother Buster, across the street. Women were just beginning to smoke in public and Mama thought it was scandalous. 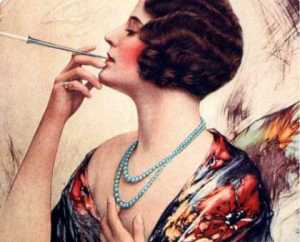 “We were beginning to see more airplanes, and stunt pilots would fly over and put on shows. At first only the daredevils were flying, but before 1930 people were beginning to use them for transportation though they were still sort of a rare means of getting somewhere, and there were few airports. I remember when Daddy flew into the Jackson Airport (now Hawkins Field) in the early ’30s, how impressed I was. Of course, he was a passenger, not a pilot.

“World War I had ended in 1918 and Mama still talked about it a lot. Daddy had not had to go since they had Tiny but when his draft number came up for review and his name came out in the paper she saved it, and I still have the paper. She told us about the local contingent Battery C leaving for France and how everyone went down to the train to see them off. Three Greenwood boys were killed in France. 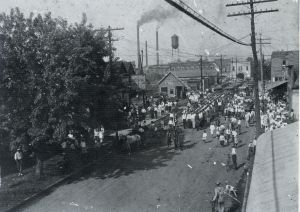 Battery C marching to the depot down Carrollton Avenue, September 1917. Notice the old Fire Station #1 in the background. 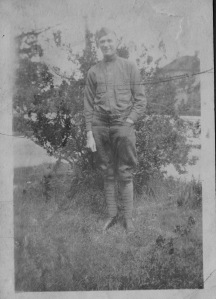 Howard's photo of an unidentified WWI soldier. Wonder who he was? It may be his brother, Dewitt.

There was a terrible flu epidemic in 1918 and many people died. Mama would tell us how upset she was when the Armistice was signed November 11, 1918, and everyone celebrated with a parade and she couldn’t go. She was in bed with the flu and Tiny was a baby. Daddy took one of the Buckeye trucks and loaded it with people and rode down Howard Street. All the whistles blew and bells rang and they said this was the war to end all wars.” 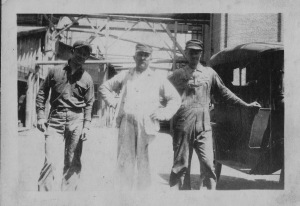 A few of Howard's men at the Buckeye

So many questions with no answers. Where do you suppose Howard flew in the early ’30s? My guess would be Cincinatti, where the Buckeye’s Proctor&Gamble homebase was located, but I guess we’ll never know for sure.

Ed. note: Hawkins Field was the origination point for Delta Airlines’ first flight in 1929. It served as an Army Air Force field during WWII, the base for the Dutch flyers, many of whom are buried in Jackson’s Greenwood Cemetery. When the new airport was built in the 1960s, the old terminal at Hawkins was allowed to deteriorate and I’m not certain that it’s even still standing. Another shame.