Both Sides of the Tracks

This may be Aunt Brown, with Tiny

“There were many people when we were growing up who were still fighting the Civil War. Many, like Mama, had heard parents and grandparents reliving the terrible times. We were led to believe there were not many good Yankees and that the only people in Mississippi who were Republicans were displaced Yankees who had moved south. Even though Lincoln had freed the slaves, the Negroes in the south were not very far removed from slave status. Everything was totally segregated, and about our only contact with black people was with servants.

“I never remember Mama or Daddy mistreating one of them, but it was always understood that they ‘must know their place.’ When I was little we had a little woman we called Aunt Brown who sometimes helped Mama out. It was customary then to call the black women ‘Auntie’ and the men ‘Uncle.’ Aunt Brown was a good person, and I was always glad when she was around. Then we had Henry Pittman, who worked for Daddy at the oil mill and did odd chores for us at home. When I was very small and they would ask me who I loved I would always say, ‘Daddy and Henry Pittman.’ In later years Henry moved to Detroit to work in one of the automobile plants. On one of his trips back home he came to see us.

“There were some small shacks for blacks just before you got to the Buckeye at the end of Strong Avenue. When Daddy would take us for a ride on Sunday afternoon Mary and I would act silly and start waving to the children. Daddy quickly let us know we should not be doing that. The black folks had their own area where they lived much as they still do, most living across the Illinois Central and C&G railroad tracks in the neighborhoods which went by such names as Gritney and Baptist Town. [Ed.note: This was written in 1990; obviously, housing patterns in Greenwood have changed since then.]

“There was no welfare then, no food stamps or Medicaid, and they were still dependent on the white folks to help take care of them. This was a holdover from slave days. Their wages were so low that there was no way they could take care of themselves, and most had no education or training. About the only things they knew how to do were pick cotton and chop cotton.” 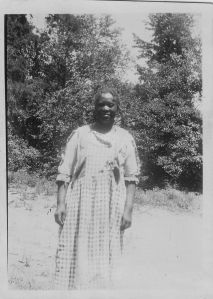 Or perhaps this is Aunt Brown. Both of these photos have no identification, so I guess we'll never know.

Ed. note: I have some thoughts on this which I will add to this blog tomorrow. Bear with me during this disjointed week.