The Saints of East Washington 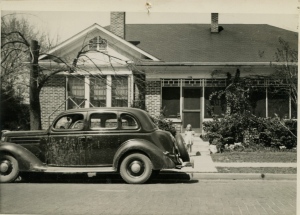 “Mama did not know what she was going to do and did not want to stay on in Jackson with no family there. Big and Uncle Roy, who are bound to have been saints, suggested we just all move in with them in the house at 115 East Washington Street in Greenwood. They had completely remodeled the house in 1930, and it was a nice big brick house, but I cannot imagine anyone taking in Mama, five children and Bama in addition to their own family of five.

“On November 11 we headed back to Greenwood, sold the Nash automobile which Amos had driven to Greenwood and moved in with the relatives. Tiny and Mary were very unhappy about having to leave their friends in Jackson. Being just eleven, I hated to say goodbye to mine but was looking forward to getting back with Spot and Joyce and my other friends that I had had before moving to Jackson.

“Rawa gave up her bedroom downstairs, and Mama, Mary, Son, Tricia and I all moved into that front bedroom. Buddy gave up his room in the back of the house, and Bama moved in there. He took one bedroom upstairs, and Tiny and Rawa the other. John slept in the room with Big and Uncle Roy. We had one bath upstairs and one down, and it wasn’t always easy to find one empty.

“Mama kept a lot of her furniture so every room was crowded, and the two attics were full. I am sure this was not meant to be a permanent solution, but it turned out to be, and we stayed on until each of us married and moved out. Then Mama stayed on in the front room until Claude died and Tricia built her duplex. [Ed.note: 1960]

“I think Mama was always insecure and frightened that she could not make it on her own with all of us to take care of. Not only were our lives changed after Daddy’s death, but theirs were too. Despite being crowded, we got along amazingly well, and Big and Uncle Roy were very good to us. The noon meal was the only one we all shared, but there was certainly a lot of good food consumed on Mama’s big dining room table. She and Bama and Big all did the cooking.” 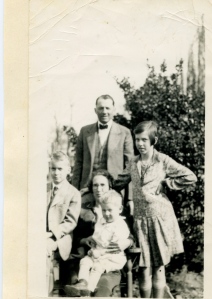 If you ever get the chance to stroll through the Calhoun Law Office on East Washington Street, try to imagine the scene in 1932 and for several years afterwards. Twelve people: Four teenagers (Rawa, Buddy, Tiny and Mamie), one preteen (Sara), two little boys (John and Son), one baby (Tricia), three adults and one granny. Five bedrooms. Two bathrooms. One kitchen, one dining room, one living room, one large screened porch. A small corner lot, right downtown. Good heavens, how did they manage? And what must the conversation have been like at the Stott house as Big and Uncle Roy not only absorbed the enormity of Jessie’s loss but the scarcity of her options? She had not worked since her premarital secretarial days, and she didn’t even drive any longer. Five children to support, plus Bama. And as if that wasn’t enough to give any rational soul pause, it was 1932, the very deepest pit of the Depression years. There were no jobs, even for someone loaded with skill and the flexibility to go out and promote themselves. And Jessie had neither. So the decision was made, and realistically, it was the only possible solution, but it still boggles the mind that these kind people opened their doors for an influx of family that was intended to be temporary. “Temporary” lasted 28 years.

Tomorrow’s blog will diverge to Sara’s description of Olive and Roy Stott, who will always be “Big” and “Uncle Roy.” They stepped forward when the chips were down and pulled Jessie and her children off the cliff, and they are legendary in this family. The stories which Sara will relate through the next few years are often funny and could only have happened in a house filled to overflowing with love and acceptance and more than a small dose of quirkiness.

Jessie’s favorite saying, as I recall it, was “It’s always darkest before the dawn.” As a child, I had no clue just how dark her predawn days had been, and I can never fully appreciate what she must have gone through in 1932. But I also don’t remember her complaining, even once, about her lot in life. She was a survivor, in every way, who found a lot of joy after those hours passed.