Frankly, my dear, I don't give a hoot.

“Most children growing up in our day were not exposed to bad words, and Mama would have died if one of us had said ‘damn’ or ‘hell.’ ‘Only very common people talk like that,’ she told us. Four letter words were unheard of in our small world, and in the movies they could not even show a couple in bed together, much less have them use any dirty language. They were all very censored, and there were no magazines like Playboy or Penthouse on the newsstands. They did not need ratings for the movies because even the suggestive ones meant nothing to innocent little us.

“In the eighth grade I received a medal from the American Legion for being the best girl citizen in my grade. Spot Pettey, my old friend from first and second grade, was named the best boy citizen.

We had assembly in the study hall, which had a stage up front, and Spot and I were called up to receive our medals. The Congressional Medal of Honor would not have seemed a bit more important to me, and I still have my medal and the certificate I received.

“Spot and I remained good friends throughout our years in school, though I only saw him once or twice after we graduated, the last time being at our 20th class reunion, when we sat together. He died in a fire at his home somewhere in Texas many years later. 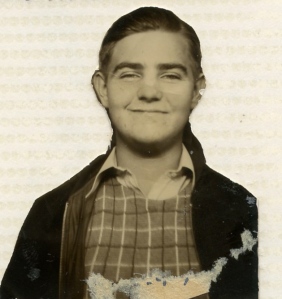 “In the spring of 1934 we celebrated the founding of Williams Landing, which later became Greenwood. There was a big pageant at the high school auditorium, and a log cabin was built on the river bank to hold exhibits. 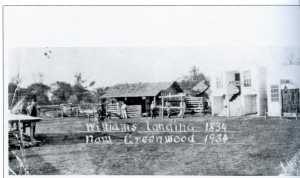 The recreated 1834 Greenwood, on the site east side of Walthall by the river.

The cabin was later moved to the end of Mississippi Avenue and was a teen hangout for many years. There was a big dance at the high school during the celebration, and the whole town was upset when a boy named William Vardaman ran out in the rain with his head down and ran right into the flag pole on the east side of the high school building. He died from the brain injury, and soon after that a little brick walk was built around the flag pole.

Old Greenwood High School. The flagpole has been moved closer to the building, but the little brick circle can still be seen on the sidewalk, left side of picture. Courtesy of Mary Rose Carter.

“There was a stadium at the end of Walthall Street on the river bank on the west side of the street. Here they had beauty contests, prize fights (boxing), and other shows. One time Nell Upshur, who lived down the street from us and whose father, Littleton Upshur, was editor of the newspaper, got free tickets to the prize fights and took me. We had a big time and wanted to go back, but I never got the chance.” 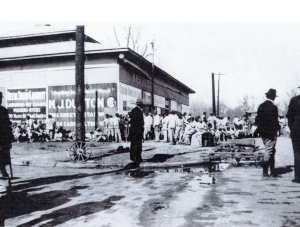 The old Keesler-Hamrick-Gillespie Stadium, now a parking lot behind the Viking Demonstration Center.

Sara’s memoirs offer us a fascinating glimpse into a forgotten world. My generation never knew that there was a 1500-seat boxing arena in what we always knew as the Ford dealership new car lot. It was completed in 1928 and gone by the early ’40s, vanished without a trace. Or that there was a recreated 1830s Greenwood riverfront just across Walthall, complete with saloons and log cabins and all sorts of idealized pioneer touches. I do remember, vaguely, that log cabin close to Whittington Park and I was fascinated with Sara’s story of the poor boy who ran headfirst into the flagpole. She would tell of his dash into the rain with great drama as we stood by the infamous pole and I assumed she was there that night when it happened. It’s a wonder hyper-vigilant Jessie ever let her children get near a flagpole again. You just can’t be too careful.