Funerals as a Spectator Sport 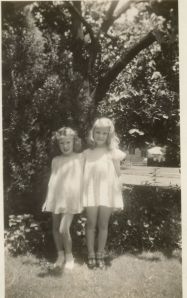 Tootie and Tricia in the Stott yard, circa 1939

“There was always a lot going on in our neighborhood since we were so close to the downtown area. One Saturday night we heard a lot of commotion up the street. Some Negroes had come out of the Paramount Theatre, which was in the next block, and one had snatched someone’s purse, and the police were chasing him down the street and shooting. A bullet or two went through the wall at Wilson Funeral Home across the street where the Post Office now stands. It was very exciting, and I don’t think anyone was hurt.

“The funeral home provided much conversation about who had died, how large a funeral they had, how upset the survivors were, etc. When the hearse would pull out we would start trying to find out who had died. Since Tricia was a friend of Betty Sue ‘Tootie’ Dudney, Mr. Wilson’s granddaughter, she had an inside track, and we would send her over to find out who had passed on. Bama always had her front row seat on the porch during a funeral and would count the cars in the procession, which seemed to denote how well you stood in the community. One time when a lady walked into the Yazoo River and drowned, Tootie came over to invite us to come see her clothes, which were by that time hanging on the Wilson’s clothesline to dry.”

The only arrangement for Sara that might have been more exciting than living across from the funeral home was to live in the police station. She was a newshound and a naturally nosy sort from Day One, and we chased ambulances and firetrucks all over Greenwood, always in the cause of good journalism, of course. One of her neighbors (who shall remain unnamed) somehow got hold of a police scanner, and she would feed breaking news to Sara, which often led to “Get in the car, quick, I’ll tell you what’s going on on the way!” And off we’d go, whizzing down the Boulevard or across the bridge in search of commotion.

I remember when the pawn shop on Carrollton Avenue caught fire in July, 2009, and the flames spread through several buildings and even into the old Midway Hotel. I called Sara at Indywood, describing what I was seeing, and she toddled outside to look at the billowing black smoke rising above downtown. “Oh, I wish I was there,” was her response, and I knew that was a whisper of an intense longing to be in the midst of whatever big news was breaking. Once a reporter, always a reporter.