The Yerger House, George Street, Greenwood, shortly before it was torn down. This is one of Sara's photos which was picked up by the wire services and went all over the world.

“Next door to the Freemans on George Street was the Yerger house, a big two-story house where De La Beckwith lived with his uncle Willie, who wasn’t very bright, and his cousin Yerger Moorhead. Mama and Big and Mrs. Freeman were always sorry for De La because his mother had died when he was a little boy and his father had been dead since he was a small child. Later when De La was accused of murdering the civil rights leader, Medgar Evers, in Jackson, Mama donated five dollars to his legal defense fund, raised by the Citizens Council. because she remembered that poor little orphan boy.

“When the Federal Building was constructed and the Yerger house sold, De La, whose Uncle Willie had died and whose cousin Yerger had married and moved out, opened up the house and sold a lot of the contents. There were rooms full of old newspapers and bank statements and all sorts of weird things. Some of the rooms were filled to the ceiling, and they had to back big trucks up under the windows and push the stuff out. Uncle Willie had bought dozens of Confederate caps and balloons and all sorts of dishes, such as 12 dishes to hold stuffed eggs, and all sorts of 10-cent-store junk. There were boxes of pencils and toys, just an indescribable amount of junk.

“Among the trash was china which had belonged to Jefferson Davis, who had been a close friend of De La’s grandmother. She [his grandmother] was a relative of the Kimbrough family and like all of the clan De La was still fighting the Civil War. They always said Willie was crazy but kind, and sometimes he would stop by the house with a bouquet of wild flowers.”

What is there to say? When an unbalanced mind is saturated with prejudice and hatred, nothing good comes of it, and sometimes the town that nurtured that mind unfairly bears the blame for generations. Sara would occasionally receive a phone call or letter from De La, who always played on the neighborhood angle to stay in her good graces. She felt him to be a dangerous man with great potential for more trouble until he died. I remember walking through the Yerger house with her not long before it was demolished; I was probably 10 or 11 years old. I had never in my life seen such a rat’s nest of moldy newspapers, receipts, crumbling books and dirt, and I recall holding my arms close to my sides so that nothing would rub against me. There is an invisible line between what children find comical and intriguing and what they find disturbing and evil, and we had crossed that line that day in the Yerger House. I’ve been in a few other homes like that during my years of exploring Mississippi, and each seems to have been indelibly marked by a sense of despair and aberrant behavior. Those houses are best left to the elements, as they can never be reclaimed. 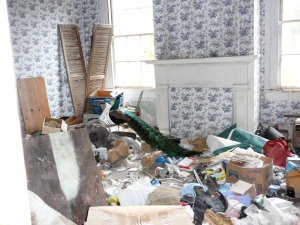 This is NOT the Yerger House, but it demonstrates the sort of clutter we found there in the '60s. And, yes, that is a peacock.

Ed. note: This is a reprint from a 1963 Time Magazine article

Byron De La Beckwith fancied himself a real Southern gentleman. He dressed with casual care, always bowed deeply from the waist when passing friends, punctuated his drawl with soft “suhs.” It therefore came as a consider able shock to some of his Greenwood. Miss., acquaintances when “Delay” (after his middle names) Beckwith, 42, was charged last week with the slaying of N.A.A.C.P. Leader Medgar Evers. Said Greenwood’s Mayor Charles E. Sampson: “We are just stunned. I don’t think he’s the type. He would always greet you with a smile.”

Yet others, who knew Beckwith better, were less surprised. To them, that gracious smile was merely the facade of a twisted, troubled personality.

The Family Tree. Family was everything to Beckwith. He never wearied of noting that a great-grandfather, Judge Hunter Holmes Southworth, owned vast spreads of rich Delta cotton land in pre-Civil War days. The judge’s daughter, Mrs. Susie Southworth Yerger, moved in the highest social circles of the Confederacy, was a close friend of Jefferson Davis’ wife Varina.

Beckwith’s paternal grandfather helped develop Lodi, Calif., south of Sacramento, where he served as the first postmaster. Beckwith’s mother, one of Greenwood’s prettiest, most popular girls, went to California to visit an aunt, married Beckwith’s father, a real estate agent. “Delay” Beckwith was born in California.*

When Beckwith was five, his father died of what the death certificate termed “pneumonia and alcoholism.” The widow returned to Greenwood with her son, was hospitalized several times for mental ailments, died of cancer at 47. The boy was then twelve. He was thereafter reared by an eccentric uncle, William Green Yerger, who dabbled at farming his family’s remaining cotton acres. Mostly, the uncle liked to catch catfish. Sometimes he just stuffed the fish into a dresser drawer at home and left them there to rot.

The family home rotted too. Says a Greenwood merchant: “Beckwith was reared in the sort of place white people ought not to live in.” Yet the premises were cluttered with mementos of the family’s better days: a letter to Beckwith’s grandmother from Jeff Davis: pieces of china from Beauvoir, the Davis mansion near Biloxi. To Beckwith, these must have suggested lush plantations, colonnaded mansions—and white supremacy.