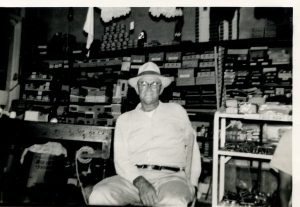 “Cudn Ern, a familiar figure around the Stott house, was Ernest Stewart, a cousin of Uncle Roy’s who worked at the light plant. He had followed Uncle Roy from Tennessee to Greenwood to work. He was an old bachelor, rough as he could be, but very lovable. He could cuss like a sailor. He had been renting a room at the Stott’s before we moved in and then he fixed himself up a room at the Light plant.

“He liked to fish and had a cabin on Six Mile Lake. He had been in the Navy during World War I. He loved children and every Saturday night he would come by the house and before he left he would lay out stacks of 3 nickels each for all of us and the Stott children and a candy bar for each. He was always generous. When he retired in later years he moved up on the lake. I think the last time we saw him was when he came to the hospital when Cathy was born [1951] and brought $10 to start her a savings account. A new bridge was being built across the Tallahatchie River and he had to take a detour to get to his cabin and wrecked his car one night and died.”

Sometimes we have to be reminded that it’s not always the rich and powerful and socially elite who leave a lasting impression on us. Ernest Stewart, a rough-around-the-edges farmboy from Tennessee, wandered into Greenwood, Mississippi and left his legacy of generosity and affection for all the Stott and Evans children. And Sara remembered him by including him in her memoirs, which fuel this blog, which will send Ern out into the world via technology he could have never imagined. His old cabin is still up on Six Mile Lake, cared for by Sara’s nephew, Trey Evans.