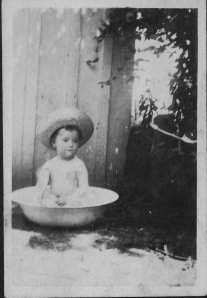 Tiny as a tot.

“It was different with Tiny. She was considered a beauty, and Mama I believe relived her own girlhood through Tiny. She was always so proud of Tiny being popular and going to all the dances and winning beauty contests. When Tiny graduated in 1936 and went to Ole Miss, Mama took her to Memphis to get a fur coat. She joined Chi Omega sorority and it was emphasized to us that this was certainly the best one on campus. 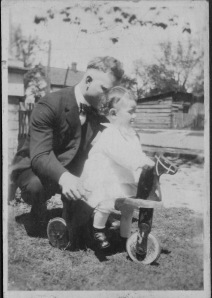 “I was very proud of her and never thought about being jealous but in retrospect I realize that there was a great difference made in Tiny and the rest of us. Bama too showed a noticeable difference with Tiny. Mama really spoiled us all and loved us all very much, but still Tiny, her first born, was special.” 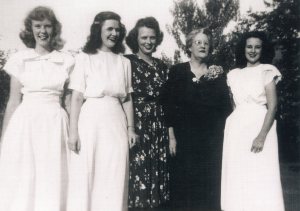 Once the family moved in with the Stotts, there seem to be no photographs of Tiny. She would have been 14 and was probably beginning her social whirl around Greenwood. Then just four years later, she was gone, off to Ole Miss and marriage to B.J.Roberson. The images we do have show a woman of near-perfect beauty and grace, the ultimate Southern Belle of Minter City. I hope no one ever thought that was all there was to Tiny, though. She was, like all the Evans children, whip smart and deeply talented. And kind, if often a bit distant. Her paintings of scenes around Belle Chase Plantation should be hanging in a gallery somewhere, and her letters to her long-time penpal in England are an eloquent memorial to life in the Delta.

Sara says she was never jealous of her oldest sister, and then immediately qualifies that with the recognition that Jessie and Bama treated Tiny differently. Probably so and probably the norm for first-borns……There’s just something about the eldest. Tiny could still send Sara into a deep funk even when they were up in their ’80s, just by a little remark or an oversight of something totally inconsequential. But when Tiny slid into an irreversible dementia, Sara softened her criticisms and, I believe, realized what a gift this first girl had been to all the Evanses. We all miss her so much.