“Boys became a top priority that year [1936], and we soon learned that being a teenager could be both wonderful and terrible. Things seemed so important then and if you didn’t have a date on Friday night it was a disaster. The summer of 1936 I began to grow up. A friend I had known when I lived in Jackson, but really had not seen since that time, Leota, Taylor, invited me for a weekend in Jackson. I rode the Greyhound Bus on a Thursday and stayed until Monday and had one of the most fun times of my life. I was royally entertained with a dance (still couldn’t dance), a picnic, a luncheon and a picture show party. 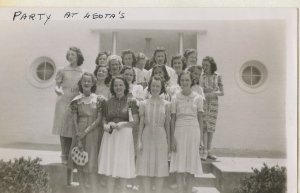 “I met two boys I really liked, both two years older than I, J.M.Weaver and Harry Holton. Leota had an older brother, Bill, and J.M. and Harry hung around the Taylor’s house a lot.

“A note from my diary reads: ‘June 13—another perfect day. Now it’s Harry Holton. All day picnic today. Harry was really nice to me. J.M. couldn’t come. Had date with J.M. tonite. We rode with Harry, Bill and Leota. We got to bed about 1 or 2 o’clock. After all that fun it was hard to come back home to a dull summer. J.M. and Harry were both killed in World War II.

“In the fall when time for the state fair rolled around again I could hardly wait to go because all my Jackson friends said they would meet the train. There was a football game in Columbus and since most of my friends were in the band and would be going to Columbus I could not find anyone to go with me. That was a terrible disappointment. A little new girl in our class, Mary Chaney, really wanted to go  but I wouldn’t agree to that. Ironically, in later years, Mary met and married Ed Harness, an Air Force officer stationed at Greenwood Army Air Field, and who after the war became chairman of the board of Proctor and Gamble.”

Sara’s little snapshots tell the story here better than I can. Just four years after her world was shattered in Jackson, an older, more outgoing and confident Sara sailed back into town for a weekend that she never forgot. Every fifteen-year-old should have such a time, when they feel like the belle of the ball and have exciting diary entries that they can treasure half-a-century later.

The house in the background with all the teenage girls has always fascinated me. I asked my son, Jim and his wife, Allison, to look for those odd portholes and slender columns when they might be driving around Belhaven. That very day Allison sent me an Iphone photo of Leota’s house, still standing on a quiet shaded street just off North State Street. Leota and Bill and Alice and probably most of the girls are long gone,  and one can only imagine the sorrow in that house when word came that J.M. and Harry were both lost in the war. They are so very alive and hopeful in these snapshots and, who knows, they might have left the future president of Proctor and Gamble in their dust. What a shame that they never got the chance.