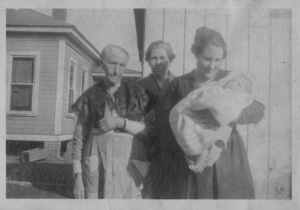 “In April [1942] a tornado hit near Itta Bena and Greenwood. A friend who was working at the Farm Security office in Greenville and I rode over to look at the damage. We spent the night at home, and when we got up the next morning Bama was not feeling well. That was the last time I saw her conscious since she got progressively worse that week and died the next Sunday morning in her little back room. I don’t think they ever knew what she died of. Dr. Gillespie had come to the house, and they just seemed to accept the fact that she wasn’t going to make it. I am sure today she would have been put in the hospital and all sorts of tests made, and she might have lived.

“She had apparently not been feeling well because she had made Mama get out a dress she wanted to be buried in. We had the funeral in the living and dining rooms with a few friends attending and her half-brother Bud from Grenada, whom we had only seen a few times. The casket was placed in front of the living room windows. She was buried on the lot with T.C. and Bigma.” 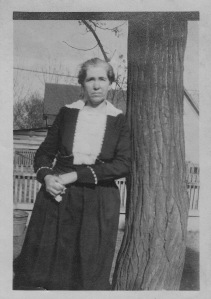 And so another link to this family’s past fades into the scrapbooks and old photo albums. If you’ve followed this blog from the beginning, you may remember that “Bama,” Theodorene Sproles West, was a Confederate widow who followed her children to Greenwood in the early 1900s. She lived with Jessie’s family and then with the extended family at the Stott house on East Washington, never having her own place after about 1913. Sara rarely mentions her after they moved back to Greenwood in 1932, and I suspect that was simply because young people are busy and having fun and find the presence of prior generations vaguely disquieting if not inconvenient. She described her grandmother as quiet and emotionally distant, unlike Jessie. Still, I’m sure there was a lonely gap after Bama died, and I think of her often as we go now to our cabin in Holmes County. The sense of place is very, very strong there, and I am grateful, as was Sara, for those pioneer genes that we inherited from our Holmes County ancestors.