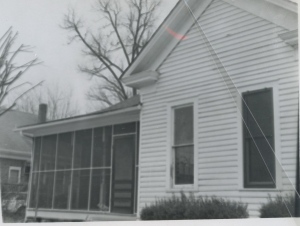 208 Walthall Street, with the Stott house in the background.

“The almost four years we lived in that little apartment at 208 Walthall Street were fun years, filled with dreams and plans for the future, a home of our own and children. We pored over house plan books but always with a reminder from Russell that he had lived through the Depression and a daily diet of black eyed peas and was never sure another one was not on the way. The Depression has stayed with him [1990] and influenced a lot of his thinking. He has never wanted to buy anything on credit unless you could pay it off at the end of the month and only agreed to finance purchases on big items when he knew that was the only way we could have them. 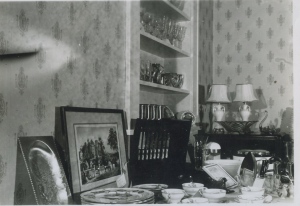 “We had become friends with Joe and Eleanor Wynns in 1949. Joe worked for Gulf Oil Company and had a great personality. They too wanted a home and were living in an apartment on Market Street. It was Joe who talked Russell into buying the lot at 409 East Adams Avenue. A group of folks (Percy DeLoach, Louie Spencer, Art Eidman, Jesse Stigler, Elmer Gwin, Hite McLean and Sol Kantor) had gotten together and bought lots in this area, so it looked like a desirable neighborhood to be in, even though we were sure we could not afford to build as fine a home as most of them.

“Joe had bought the lot across the street at 501 East Adams, and he planned to build right away and did. We bought our lot for $2100 from Louie Spencer’s father. We paid a higher price than most of those around us because this was a high lot and on the corner. We could have bought one in the block beyond us for $1500.”

I’ve spent the past two days at Senator J. Z.George’s mansion, Cotesworth, out in Carroll County. Senator George once owned the land that later became North Greenwood in general and East Adams Avenue in particular. By the time Sara was dreaming her big dreams and Russell was reminding her that life can throw unexpected curves, George’s old cotton fields were giving way to asphalt and street names. I’m trying, in a very small way, to honor that man by showing off his grand home to visitors this weekend, and  perhaps a bit of that effort is payback for the acre of so of his land that wound up being a very, very, very happy home for my family. Isn’t life strange?