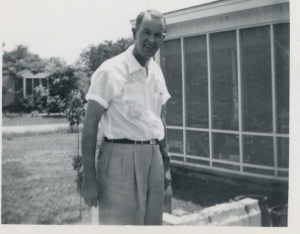 “In addition to the start of the Korean War, another thing that influenced us to go on and start building was the fact that we had found out in early June that Cathy was on the way.

We had decided early that year to start trying to start a family and were delighted when I went to Dr. John Lucas and got the news that I was pregnant. We went back to the Chamber of Commerce office and broke the news to Botts, who replied, ‘I knew when you went to the doctor and I heard both of you coming up the stairs that you were going to tell me that.’ He said I could work as long as I wanted to, but I told him I would like to quit the middle of September. At that time not too many people kept working until time for the baby to be born, and then, too, I wanted some time to check on the house building and make curtains, etc.

“When I did leave the Chamber of Commerce I had a real let-down feeling because those years meant a lot to me. Dorothy Hayes, who was librarian and a friend of mine, called and asked me if I would fill in at the library for a few weeks, so I accepted and worked down there about three weeks, which helped pass the time away and gave me a little spending money.”

Greenwood Leflore Library, where Sara's brief career as a librarian ran its course in 1950.The east wing of the building would not have been there then.

Hang on, folks…….The Criss train is jumping the tracks and headed off on a wild ride. Babies change everything. Forever. Remember those faded photos from the Strong Avenue bungalow, where tiny Sara always has a doll clutched in her hands? Her whole life was leading up to this point, and she never looked back. She thought her days as a “working girl” were over, left behind with the mimeograph machine and pressure of the Chamber of Commerce. Little did she know that her greatest adventures were around the corner, both as a mother and a writer.