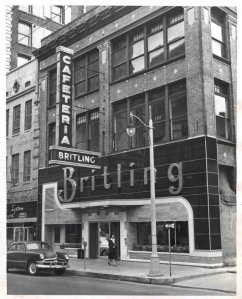 “On that trip [to Memphis] Mama and Cathy and I walked down to Britling’s Cafeteria. Poor Mama was so starved by that time that she went wild. She ate everything she had not been allowed to have, and even ate two desserts. Of course, it was not too long before she started putting the weight back on. But before she did she agreed to fly with Tricia to see Mary and Howard in Ohio, which was a real shock to all of us. She had a wonderful time, but I don’t think she ever took another trip.

“Looking back, she really had almost no social life. She did not go to church after Daddy died. She said she could not go to funerals and that ‘they would understand.’ We tried to tell her that people did not understand, but nevertheless she didn’t go. She never joined clubs and always said a bunch of women just bored her. We were her whole life, and she devoted most of her time to us. 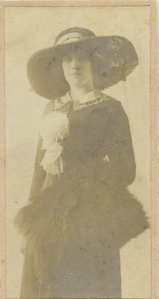 Jessie before her marriage, about 1915

“When she did go back to work it was good for her because she was at least being with people other than family, and she made some good friends at work. She liked to go to the picture show but didn’t go often. She loved musicals and would try to go to them. She never went out to eat, and I never remember her going to a party. She had a wonderful sense of humor and could find something funny in almost any story. Any spare time she had was spent reading, and she read everything she could get her hands on as long as she was able, which was almost her whole life. She was still subscribing to all the popular magazines when she died.”

Sara was a total extrovert and could not understand the choices which Jessie made about her own life. She wasn’t a recluse but neither was she one who felt the need to “see and be seen,” a common and not endearing trait in the Delta. She kept her business to herself and focused on raising the five children whose well-being fell on her shoulders, and that didn’t require that she haunt the country club or the local restaurants or even the Baptist church. More power to her.

I like to think that my grandmother was happy. That’s how I remember her, and I don’t think my memories are filtered through unrealistic mists of time. She laughed a lot and, as Sara said, could light up a room with her funny stories. Her little living room on West Claiborne was almost always full of her children and grandchildren and the only folks I ever remember her being blatantly rude to were the Jehovah’s Witnesses, who seemed to have put her at the top of their list of lost souls in need of salvation. She would rattle the whole house slamming that front door as they tried to slip a “Watchtower” through the screen. To everyone else, she was cordial and polite and a good friend to many people through the years. She just lived life totally on her own terms, a rare feat. 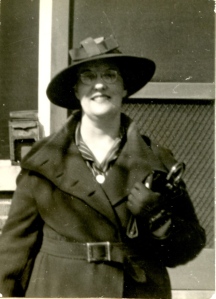 Jessie on her way to the Red Cross office