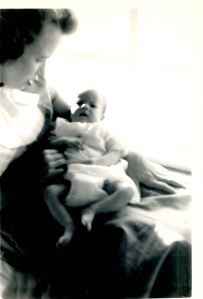 “In 1953 we decided it was time to get a playmate for Cathy. In the late summer I found out I was pregnant again, and we started telling Cathy she was going to get a sister. She talked about ‘the sister’ all the time, and I don’t know what we would have done had she been a brother. We made arrangements with Georgia Edwards, who had worked for the Doyles, to start working for us after the first of the year so that Cathy could get used to her before I went to the hospital to have Mary Carol.

“Mary Carol was due March 25th. The weather had turned very warm. We had an early spring that year and had ordered our first window air conditioner from Sears but had not installed it yet. We had tried to explain to Cathy that I would be in the hospital for a few days and that Georgia and Granny would take care of her, but apparently we did not do our job well. On the 25th I went to Dr. Lucas and found out that my blood pressure had gone up. He told me to go right to the hospital. I got upset and so did Cathy, and I left her crying with Tricia and Mama. She had never spent a night away from me. Tricia and her boyfriend, Bob Fortenberry, took her out to the Delta Livestock Fair to try to make her happy. Georgia was at home with her during the day, and she remembers that she cried and Cathy cried.

“Finally, late in the afternoon of the 27th, Dr. Lucas came in and said that he was going to induce labor since he had gotten my blood pressure down. I always thought that since it was Saturday he was trying to get all the babies delivered so he could have a peaceful weekend. He also decided it was time to get another mama started, and then he went home to eat supper. There was already another [patient] in labor but with a different doctor. They lost both of the other babies, and Mrs. Aubrey Bell, who was in the hall, said Russell very calmly ate his hamburger during all the commotion.

“Mary Carol decided it was time to make her appearance, and they called for Dr. Lucas to come back. I never was sure whether he made it back in time or whether the nurse, Toodles Joiner, actually delivered her.”

Cathy and her playmate

So the truth comes out. I was ordered up as a playmate for Cathy, like a new Betsy Wetsy doll. Good grief. As will become evident over the next couple of postings, Cathy’s yearning for a little sister had evaporated by the time Sara packed her bag and headed for Greenwood Leflore Hospital, and the next few weeks, according to family legend, were just a bit rocky. Big Sis thought babies came with a money-back guarantee, and she wanted her money back immediately, no questions asked. And as I was the second daughter and fourth granddaughter in a row, she probably wasn’t the only one who felt that life might just be easier if we shipped this one back. I was handed off to Russell and Georgia for protection and we quickly formed our own little mutual admiration circle.

I’m still around, obviously, but Cathy has yet to decide if I’m a keeper.