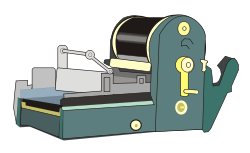 “I was always trying to think of some way to pick up money and not have to leave home. Since I had done mimeographing on the side at the Chamber of Commerce I found an old mimeograph machine at Fisher’s [Stationery and Office Supply] one day and paid $50 for it and started doing some of that at home. That wasn’t too satisfactory because the ink on the machine was so messy, and I didn’t like having people coming to the house to bring me work, but I did make a little money that way.

“In the summer of 1955 a fellow named Dan Farrell, head of Taylor Chemical Company of Aberdeen, North Carolina, was referred to me by the Chamber of Commerce to mimeograph some letters. They had set up an office at the Holiday Inn to sell cotton poison that summer. Then Farrell asked me if I would come out there and help them out. Since Georgia was here I told him I would help for a few days, which stretched into three or four weeks. He and the other men with the company were so nice, and I made enough money for us to buy our first black and white television set. 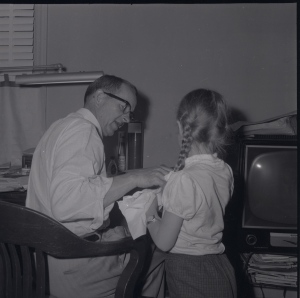 Russell and Cathy with the first TV on the right.

The cable company was just being organized and the reception we got on the cable was almost nothing but snow, but we watched it anyway, and the children spent hours watching Pinkie Lee and Howdy Doody and Miss Frances and the Ding Dong School.” 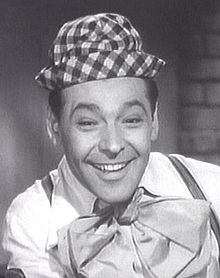 Two indelible childhood memories: The smell of fresh mimeograph ink (Remember those study sheets that your teacher would carry in, still warm from the machine? That’s the smell) and curling up in Russell’s rocking chair early in the morning to watch TV. Miss Frances and the Ding Dong School stick in my mind; Howdy Doody and Pinkie Lee left no impression, other than what I’ve seen in old books. That chair took us through many a Saturday morning, with Roy Rogers and Sky King and Hopalong Cassidy and Huckleberry Hound and Rocky and Bullwinkle. When I left for college, we were still living in a black and white world, which I found humiliating. The Beamans had one of the first color TVs, and on occasion they would invite us down on Sunday evening to watch “Walt Disney’s Wonderful World of Color” and “Bonanza.” I was enthralled. Rumor had it that Lucille Ball’s hair was red and the brick road in the “Wizard of Oz” really was yellow and Mr. Green Jeans’ jeans were truly green, but how was I to know? I had unreasonable parents who, in some twisted logic, thought it more important to save for my education than to provide me with a technicolor childhood.