Give My Regards to East Adams

Planning for the big back yard show

“One summer when Melanie [Bartling, Mamie’s daughter] was here she, Cathy, Mary Carol, Jeanne Young, Montine Young and Patricia Murphy decided to put on a show in the backyard. Melanie was the director. I helped them round up costumes (handed down recital costumes, Halloween costumes, and even old evening dresses). All the neighbors came to watch, sitting in yard chairs, even the McLean’s dog. 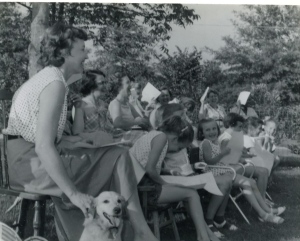 Standing Room Only. Brownie McLean is in the foreground.

“Cathy and Melanie held up a giant paper doll and sang the song ‘Paper Doll.’

Mary Carol, dressed up in a green frog suit left over from Halloween, sang ‘He’s Got the Whole World in His Hands.’ 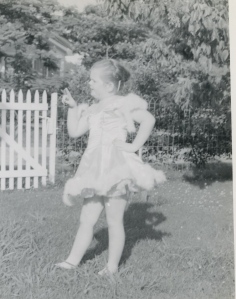 Little fat Jeanne in a ballerina costume sang ‘Five Foot Two, Eyes of Blue’ and Montine sang ‘Tea for Two.’ Patricia Murphy, who was living in Texas and visiting her grandmother [Mrs. Beaman], sang ‘The Yellow Rose of Texas.’

Patricia Murphy, AKA The Yellow Rose of Texas

Melanie was dressed in one of Pam’s old dance costumes had a lot of glitter on it. It was in July and hot as could be and we had a terrible time getting her out of it because it had stuck to her. She had glitter all over her and was crying and saying ‘I’ll never get it off.’ 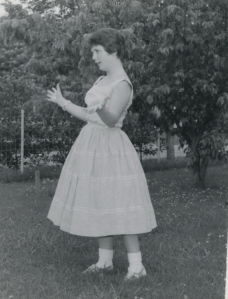 “With the neighborhood full of children there was always some activity going on. Sadly, two of the neighborhood kids, Jeanne Young and Chris Eidman, were killed in separate automobile accidents while they were college students.”

Let’s be blunt here. Cathy absconded with the money. We should have given it to Montine for safekeeping. And yes, there is a photo of me in that green frog outfit, but it’s my blog and my negative and there are limits to what I will do to illustrate Sara’s memoirs.

1 Response to Give My Regards to East Adams