“I got very interested in politics after covering City Council meetings and Board of Supervisors’ meetings, and I kept up with everything that was going on. I also attended a lot of meetings and enjoyed being in on the day-t0-day happenings of Greenwood and Leflore County. 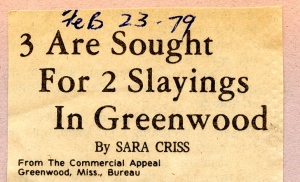 “Some of the trials I covered were quite interesting, especially the murder trials, the last one I covered being that of three youths charged with murdering two men at the Leflore County Country Club. That was the last big story I covered, and I got a byline on the front page several days straight. Of course, I always liked those bylines.

“Another interesting case was that of the mother and her sixteen-year-old daughter charged with planning the murder of the woman’s husband by the daughter’s boyfriend. I had already covered his trial when he was sentenced to the state penitentiary. Both them were sentenced amid much dramatics when the girl pretended to faint, etc. Other big trials included the one in which two men were charged with killing a policeman’s son and putting his body on the railroad tracks and one when two black men murdered a highway patrolman.”

One of Sara's earliest murder trials

It wasn’t all debutantes and football games and little boys fishing on a lake bank. Like any community, Greenwood had its share of lowlifes and knuckleheads and there were many tough trials to cover. Most involved people that Sara didn’t know, but on occasion it could get very personal up there in that grand old Leflore County courtroom. I’m sure Sara discussed the sordid details with Russell, after Cathy and I were put to bed and delicate ears were asleep. And I’m sure she was upset at what she saw and heard, not only in legal matters but at City Council and Board of Supervisors and anywhere that folks given a bit of power forgot about decency and good judgement. She had her favorites on those panels, but none that she admired like Jimmy Green, Bill Kellum and James Hooper, all supervisors in the ’60s and ’70s. All of them, Sara included, must be restless spirits when today’s Board starts its usual circus routine.

I do recall one trial in the big courtroom upstairs at the Court House, when I was probably about 10. Sara was covering it, a rape case involving someone from (I believe) Grenada. She had left me at the library and I decided to wander over and see how things were going. I slipped into the back of the courtroom, took a seat and started hearing a lot of details that I simply didn’t understand. Sara left the press area, rushing to meet a deadline, and spotted me as she was coming down the aisle. I will never, never forget the look of abject horror on her face as she realized what I had just been exposed to. She practically pulled my arm out of its socket getting me out of there, propelling me down the stairs and off to the car. I had a bucket full of questions to ask her but the timing was obviously not optimal. All I recall of her explanation was that there were bad people in the world and everyone connected with that trial was low down and untrustworthy. And we left it at that. I never pulled that stunt again.