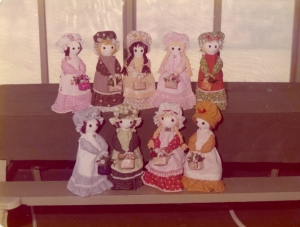 “Then we would go to the Canton Flea Market and come home with nearly $1000, and we would be ecstatic. I would head back to the sewing machine to turn out dozens more of them. The first doll I had seen in the magazine had on a Betsy Ross outfit in honor of the upcoming Bicentennial celebration. I made a number of Betsys that year and they sold very well.

“Most of what I sold though was dolls to go in little girls’ rooms. I bought little flowered prints and checked gingham everywhere I could find them at a good price and matched them up in blues, greens, pinks, yellows, peaches, etc. They had blonde, brunette and red hair and sometimes it would take customers a long time trying to pick out just the right one for a little girl. Some went to grownups too and to people in nursing homes. I sold them to all ages from two years old up to those in their nineties. It was evident that little girls never outgrow their love of dolls. 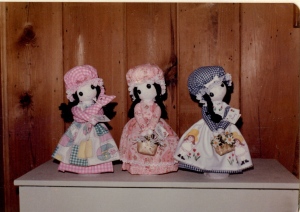 “I also sold brides, black mammies, Mrs. Santa and angels. The Christmas dolls sold like crazy every fall. I took the original idea for the doll on the bottle and changed it up and shaped the styrofoam heads and made their faces cuter and their dresses and pinafores prettier so that the ‘Lil’ Missy’ dolls, which was the name I gave them, were really my own original creations. I had lots of little old ladies trying their best to copy them, but I never did see any who were quite successful, and I was very careful not to ever share my pattern.”

Sara and Russell worked as they had never worked before once the doll phenomenon really took off. As much fun as it was for Sara, buying material (always a passion) and crafting tiny dresses and pinafores and bonnets, it required hours of packing and sorting and hauling and setting up tables at crafts shows. When she had a slow day, she would be down in the dumps, but invariably decided that that particular town was “just country,” i.e., full of bumpkins who didn’t know quality when they saw it. I will not name names here, but there were certain communities which she never forgave. Including Tupelo, where I lived for 12 years, because she was never invited to participate in the Gum Tree Arts Show. She felt that those folks were just way too big for their britches, and she was probably right. I never saw anything on the Lee County Courthouse lawn nearly as cute as her dolls. Tupelo’s loss, for sure.

Russell was in his glory during the doll days, as he got to cruise the crowds and drum up business, and the natural-born salesman in him would go into overdrive. I’m sure he was appreciative of the money coming in, but he was most pleased at how excited Sara would be each and every time a little girl walked away clutching a doll. There’s never been a mutual admiration society like the one those two enjoyed for fifty years and this era was the culmination of believing in each other and supporting each other through thick and thin. 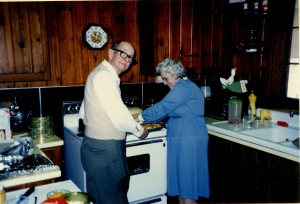