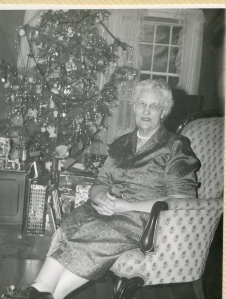 Jessie at one of Sara's Christmas Eve parties

“In 1981 we put Mama in the nursing home. She did not want to go but for a while enjoyed the company and being waited on. In the last year of her life she could not remember things very well and was terribly frustrated. She knew that Mary Carol was going to have a baby but she did not live to see Emily. In 1983 she had heart failure and died in September after being in the hospital three weeks in more or less of a coma. It was then that I realized what an important part of my life she had been and how much she had meant to her grandchildren and the great grandchildren who were born before she died.” 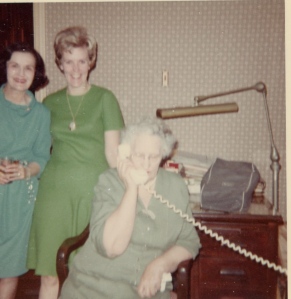 Mamie and Tricia look on as Jessie has a word with Santa Claus, Christmas Eve.

I’ve said so much in these blogs about Jessie that I simply don’t know what else to add. She was so central in my life and the lives of all her children and grandchildren and there has been such a hole in our universe since she left us 28 years ago. I knew her as a sweet, warm, loving soul growing up, but I had no clue what kind of tragedy had befallen her as a young mother. She never mentioned it. She never engaged in recrimination or self-pity or remorse. She had accepted the Stotts’ offer of a home for her family, stayed there 28 years, raised her children in that house with an awareness of the gratitude owed to their aunt and uncle and cousins and made a life for herself beyond the bounds of marriage and early widowhood. She mixed drinks for the Air Base cadets and brought soldiers home for family crises through the Red Cross and provided a center, a solid base, for our extended family in her duplex on West Claiborne. Her long green couch could hold most of her offspring and the toy box in the corner by the TV was stuffed full of blocks and trucks and dolls and balls and everything a grandchild could need. After she retired from the Red Cross, she rarely left the house other than for runs to the grocery store with Tiny, but she dressed up and made a grand appearance each year at Sara and Russell’s big Christmas Eve party. What must she have thought on some of those nights, seated in her big comfortable chair, looking at the overabundance of presents spilling out from under a huge tree, just waiting for her five children and eight grandchildren to start opening them? Those children were all successful and married to wonderful Evans-in-laws and the grandchildren were healthy and happy if not always on their best behavior. Occasionally, though she never mentioned it, her mind must have drifted back to quieter, leaner Christmases in Durant and loved ones long gone and to that long drive home from Jackson in 1932, facing a Depression Christmas and a future with five children to raise alone. Her favorite saying, when one of us would climb up in her bed and pour our troubles out to her, was “It’s always darkest before the dawn.” She said it with conviction, for she had lived it.

A few years ago, I sat for a photographer in Tupelo to have some promotional portraits made when one of my books was coming out. The proofs came back online and when I opened the website, I just had to laugh. There was Jessie, looking out at me from my computer screen.  As my own face ages and changes, I can see her in my own mirror, and watching each of her children, Tiny and Mamie and Sara and Son and Tricia, age has demonstrated a similar transformation, sometimes in an almost startling fashion. She’s been gone for more than a quarter-century but, as with all good mothers, she lives on in those she loved and molded. 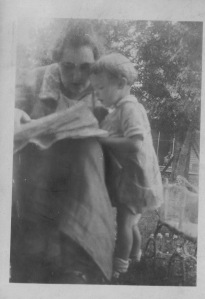