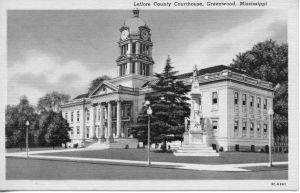 “The Civil Rights Era, though generally thought of as being the ’60s, really began in Leflore County, Mississippi, in the late summer of 1955 with the brutal killing of a fourteen-year-old Chicago Negro, Emmett Till.

“I was working for a North Carolina chemical company for a brief time that summer, and we had set up an office in a room at the old Holiday Inn. I remember walking into the office one hot day in August and Dan Farrell, my boss, who was a North Carolinian, asking me if I had heard on the news that a young Chicago Negro had been reported missing. The boy had been visiting his uncle, Mose Wright, who lived near Money, and Wright had reported to Sheriff George Smith that two white men had come to his house after midnight and driven away with Till.

“Till had apparently gone into the store in Money which was operated by Roy Bryant and whistled at Bryant’s wife and said, ‘Bye, Baby’ to her. Mrs. Bryant was operating the store that Saturday night while her husband and his brother-in-law J.W. Milam were out of the state.

“Till was beaten and his body weighted down and thrown into the Tallahatchie River, where it was discovered later. Milam and Bryant were arrested and charged with the murder in Tallahatchie County. The horror of the story drew newsmen from all over the country to cover the trial in Sumner in Tallahatchie County. The pair were acquitted by an all-white male jury, and later a Leflore County Grand Jury refused to indict them on charges of kidnapping. It was inevitable that Mississippi and Leflore County were to be targets in the upcoming Civil Rights struggle.

“Before Milam and Bryant were brought to trial they were supposedly being kept in the Leflore County jail over the Labor Day weekend. The National Guard was called out to provide security around the Court House, and they marched around the block, armed and ready for any possible disturbance.

“The Fourth of July and Labor Day have always been big holidays for blacks and usually have meant an influx of their kin who have left the Mississippi Delta for the North and who return home driving Cadillacs and other fancy automobiles, many of which are said to be rented for the trip southward. So it really wasn’t any different than on previous holidays, but the report was circulated that a steady stream of cars with northern license plates were headed to Mississippi and that there could be trouble.

“As the guardsmen marched around the Court House, a car carrying a load of Negro passengers broke down just as it reached the north side of the Court House by the Yazoo River. Sheriff George Smith approached the car after the occupants had gotten out and started trying to push it. When the sheriff asked, ‘What are you up to?’ the driver got the car started and dashed off, leaving his passengers stranded there and frightened to death. It turned out they were local Negroes who just happened to break down in the wrong place.

“I asked the sheriff if Milam and Bryant had really been housed in the local jail that night, and he laughed and said they had not, but they were trying to conceal their whereabouts and let people think they were.”