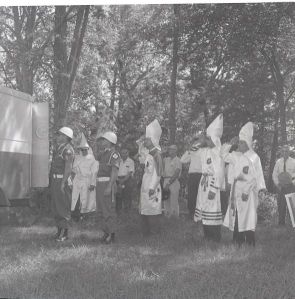 One of Sara's photos, probably from the 1966 Klan rally

“In May of 1966, on a hot Sunday afternoon, we attended a Ku Klux Klan rally on the grounds of the Veterans of Foreign Wars Clubhouse. Russell, Carol Franklin of the Commonwealth and I drove out to the site where a large sign was posted close to Highway 82 East advertising the rally. Members of the Klan Security Guard were posted at the entrance to direct traffic. We were a little afraid of what we were getting into but drove on in. About 200 persons attended the rally and listed to fiery speeches by the Grand Dragons of the United Klans of Mississippi and Louisiana.

“Many of those attending wore the white robes. ‘Dixie’ and ‘The Star Spangled Banner’ were being played on record players. De La Beckwith was introduced to the crowd and walked to the platform amid loud applause from the gathering. ‘The Ku Klux Klan is coming back from every hill and hollow,’ shouted E. L. McDaniel, Mississippi Grand Dragon. ‘It is the only thing left,’ he added. They referred to Martin Luther King as a ‘dirty rotten filthy skunk n—-r.’ 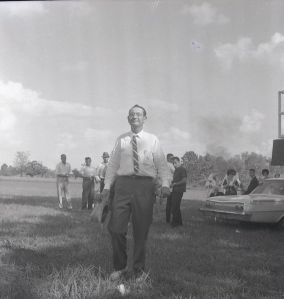 “The FBI, the Justice Department, Greenville newspaper publisher Hodding Carter and ministers came under attack as well as Senator James Eastland, Governor Paul Johnson, along with the president. The meeting ended with the burning of a large cross as robed Klansmen and Klanswomen, carrying small burning crosses, circled a large one. Most of the Klansmen in robes were from other areas. At least three arrived in a car bearing Lafayette County (Oxford) tags. I took pictures with no interference, but we were all three just as glad to get away from there with nothing being said to us.

“Some of the members of the VFW were furious when they learned that the Klan had been given permission to meet on the grounds. An ad in the newspaper had announced that the rally would be held two miles east of Greenwood on Highway 82 but did not state that it would be held on the VFW grounds. A few days later Deloach Cope, state commander of the VFW, issued a statement that the National Headquarters of VFW had suspended the charter of the local group for the time being until the matter could be cleared up. No one wanted to admit they had given them permission to meet there.”