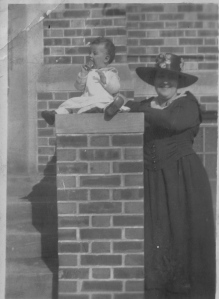 Jessie West Evans with her first daughter, Jessie (“Tiny), on the steps of the Greenwood Leflore Public Library.

Continuing our exploration of Greenwood’s historic architecture through Sara’s photo collection, we’ll look at a building that meant the world to three generations of this family. On a bright Sunday morning, just after church at First Methodist, Jessie proudly props Tiny up on the steps outside of the Greenwood Leflore Public Library. Tiny was born in the spring of 1918 and appears to be about 8 or 9 months old; other photos taken that day show the trees bare and everyone in dark clothing, so it’s likely in November or December of 1918. At that time, the Evanses were living right across West Washington from the library, so this lovely public building was a logical site for Howard to pose the ladies in his life for a few snapshots.

That date means that Jessie, Tiny and their family were posing by a practically new building, finished in 1914. This inspiring dark brick structure was the pride of Greenwood, a testament to the Henderson family and a sign of culture and progress in a place that had been little more than a rough-and-tumble riverboat landing just a few decades prior. Here’s how it came to be:

Lizzie George Henderson with her 1912 Detroit Electric car. The original east facade of the library is seen behind her.

Lizzie George Henderson was the youngest child of Carrollton’s Senator J.Z. George; she grew up at Cotesworth surrounded by servants and books. When she married Dr. T. R. Henderson, she moved down to Greenwood and set about remaking her adopted town in her own image. Miss Lizzie was a force to be reckoned with: National president of the United Daughters of the Confederacy (at a time when “Lost Cause” organizations wielded enormous clout), local founder and president of the Greenwood Woman’s Club, pillar of the Baptist Church, etc., etc. When this fierce lady set her mind on a project and lined up her Woman’s Club  and church buddies behind it, it was going to happen. Their husbands learned to smile, nod appreciatively, hand over their wallets and get out of the way.

The Hendersons lived in an enormous two-story white house on the northwest corner of West Washington and Cotton streets. And they owned pretty much all of the real estate within walking distance around them. In 1910, they donated most of a city block for a new First Baptist Church and funded much of the construction personally (more on First Baptist Church and its unfortunate demolition in posts to come). Just across Henderson Street (wonder who that was named for?), Lizzie oversaw the construction of the Confederate Memorial Building in 1912. She had seen a similar tribute in Richmond, Virginia, and was not about to have Greenwood overshadowed in commitment to the men in grey. She wanted a Memorial Building, she had the clout and the money, and Greenwood watched the nation’s second CMB rise across from the church.

Now there was a large lot left behind the Henderson home and its outbuildings. Miss Lizzie looked around, noticed that the only access to books was a tiny lending library in a riverfront general store, and decreed that Greenwood’s next big project would be a Carnegie Library. Pity the Carnegie Foundation. This philanthropic arm of Andrew Carnegie’s estate had built libraries all over America, but it’s a sure bet they had never encountered anyone quite like Lizzie George Henderson. She charmed them right out of $10,000, promising to have the City of Greenwood match that amount. When the city could only come up with $8900, Dr. Henderson pulled out his checkbook and made up the difference. In the fall of 1914, the arched doors of the library opened to eager readers, who found almost 1000 books already on the shelves. And where had the books come from? Lizzie sent her oldest brother, Cot George, up Valley Hill to Carrollton in a wagon and instructed him to pull as many books as he could off the shelves of the Cotesworth Library.

Miss Lizzie’s library was an enduring gift to Greenwood and to Sara’s family. Here is the National Register Nomination description of the 1914 building and its 1954 addition: “Two-story on raised basement, four-by-six bay, L-shaped brick structure possessing a picturesque silhouette of multiple steep-sided gables, chimney stacks, and distinctive window treatment, all indicative of the Jacobethan mode. Stone pointed arches with deeply splayed reveals form entry pavilions on the south and west elevation with shaped parapets above. Windows are of the mullion type, usually in triple casement-type units, with small rectangular panes, and some having transoms. Chimney stacks are tall and grouped in paired shafts or appear singly. Brickwork is in the Flemish bond pattern.”

Translation: This is one stunning public building. And what those dry descriptions don’t capture is the warm and welcoming environment which was always a characteristic of this library. Jessie and her children spent hours and hours there, poring through picture books and the latest novels and leafing through magazines, instilling in those children a love of reading which stayed with all five of them through life. It was my favorite destination, better even than the Paramount or the City Pool, because I could lose myself in all those endless shelves of adventure and science and mystery, overseen by the kind Dorothy Hayes. I don’t know for sure if Bigma and Bama availed themselves of its treasures, but I know my Great-uncle Roy Stott walked there almost every single day after his retirement from Greenwood Utilities, carrying a grocery bag full of westerns home to read in his big overstuffed chair at 115 East Washington.

The old library celebrated its 100th anniversary last year, but the cake and accolades were found across the street in the 1979 building, not in the sadly neglected Carnegie building. It’s been rarely used in the past 36 years and stands waiting for a purpose and for life to pour back through those wonderful doors. Lallah Walker Lewis’ murals, which watched over the children’s room from 1937 until just a few years ago, are restored and crated up in the courthouse, just waiting to be put back over those casement windows.

I think of my grandmother, Jessie, and Bama and Bigma when I ride by the library, trying to picture them posing with those small children on that 1918 Sunday. I suspect that these women, who grew up in rural Holmes County with very limited access to books, much less outstanding architecture, would have one question for us as a community: “How did you let this happen?” And we don’t even want to imagine what Miss Lizzie would have to say. I hope to never, never run into her ghost in that library.