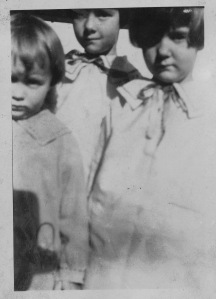 Sara, Tiny and Mamie, maybe waiting for the Syrup of Pepsin

“Mama hovered over all of us and was always feeling our foreheads to see if we had fever. She would call Dr. Dickens at the slightest provocation or if we had a runny nose and he would come with his little black bag. Sometimes we would all meet him at the door, and he would ask which one was sick.

“Mama always said that Tiny was the sickly one, and she felt her head so much that Tiny started feeling her own and would run to Mama and say, ‘Mama, I felt myself a fever.’

“Mama had a real hangup about regular bathroom habits, so every night before we went to bed we lined up for our Syrup of Pepsin, a nasty brown laxative. Mable Petty said that one night she got in line too and got a dose. 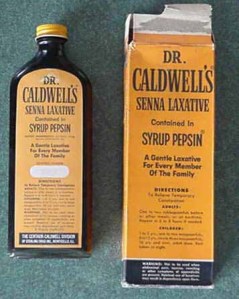 “Then every few months we could expect a ’round of calamel.’ [sic]. This foul hot pink medicine was supposed to be a cure for everything that ailed you and was used to ‘clean you out.’ That it did, giving you a terrible case of diarrhea and, as I recall, making you feel twice as bad as you did before you took it. To this day hot pink is not one of my favorite colors. 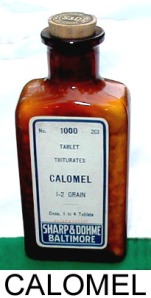 “With so many of us sleeping in the same room we passed around the usual childhood ailments, chickenpox, whooping cough, mumps, etc. When we had colds or flu our chests were rubbed with Vicks salve and covered with a flannel cloth. There were no sprays, or vaporizers, or any of the other so called remedies available today.

“One time I was sick when the circus came to town, and that was just about the worst thing I could imagine happening to me. Mama consoled me by calling Fountain’s and ordering a metal dollhouse complete with Tootsie Toy furniture. That helped the situation, but I never really got over missing the circus while all the others got to go.”

Sara was blessed with remarkably good health for most of her 88 years, but when she did get sick, it was an event. Declarations of pathologic superiority were frequent. “This is the worst cold I’ve ever had,” would be predictably followed by “This is the worst cold anyone has ever had.” “This is no ordinary diarrhea. No one can imagine how bad I feel.” Sympathy or skepticism were met with the same stony response: Sara Evans Criss was a medical miracle, the unfortunate repetitive victim of the most malignant bugs and vicious viruses. My strong suspicion is that this attitude was some deep-seated subconscious attempt to one-up Tiny, even decades after their last spoonful of Calomel.

Jessie never gave up on her alimentary fixation. She moved on from Calomel and Syrup of Pepsin to singlehandedly supporting the stock prices of Proctor & Gamble and the Phillips Company. As predictably as rain, the little courier car from Barrett’s Drugs would pull up on West Claiborne and out would come a gallon (!) of Pepto-Bismol and another gallon of Milk of Magnesia. These “Sam’s Club-size-before-there-was-a-Sam’s Club” containers sat in Jessie’s pink-tiled bathroom, their contents dwindling daily until they would be replaced by the next set. I found them wondrous mysteries, more so for their vivid pink and deep blue colors and the sheer size than for any medicinal properties they might offer.

We laugh at these two ladies and their respective obsessions about regularity and severity of symptoms. But each lived to see their 88th year, so who’s to say that we shouldn’t all be hitting the Pepsin and hoping we have the worst cold in the history of mankind.

And the lamented circus? Sara never missed an appearance by Barnum, Bailey, Ringling or any of their less flamboyant imitators through the years of my childhood. We didn’t just go to the circus; we met the train at the depot and followed the parade through downtown, then were awakened at dawn the next morning to go out and watch the elephants straining to raise the Big Top. Ringmasters were interviewed and clowns were photographed and, as with so many other doors that Sara’s press pass opened, Cathy and I were the luckiest little girls in Greenwood.

Ed. note: Syrup of Pepsin was invented by William Caldwell, a pharmacist and physician, in Monticello, Illinois in the late 1800s. It grew into a huge company before being bought out for 5 million dollars in 1925; ironically, the new owner also bottled Phillips’ Milk of Magnesia. Calomel was the more disturbing creation, basically mercury chloride, used not only as a laxative but also as a pesticide and in the treatment of syphilis. The Evans girls must have been made of stern stuff.

Tootsie toys were the creation of the Dowst Brothers, who fashioned die cast zinc/aluminum miniature furniture for popular cardboard dollhouses of the 1920s. Eventually a metal dollhouse was available (for approximately $3.00) and this is likely what Sara received as a consolation present.