In Our Merry Hupmobile 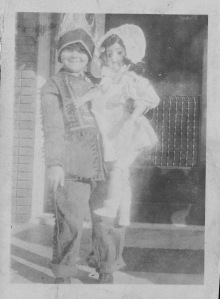 “The last Christmas we were in Greenwood before moving to Jackson, Mary and I….got little girl dolls that year with heavy celluloid heads. They were very pretty, and I don’t remember ever seeing any others like them. Daddy had brought home electric Christmas tree lights that year, and we were so excited.

“We played paper dolls a lot, something which today’s children seem to have missed. We could hardly wait for the Sears catalog to come out so that we could start cutting them out. That was about our only source of men paper dolls. We could find plenty of ladies and children in magazines like Pictorial Review, Delineator and Ladies Home Journal, but we were always needing more men and boys. Mary and I would fight over the ‘snow babies,’ which were the babies in little knit snow suits. They were our favorites. We would file away our paper dolls in old magazines with the pages folded over to protect them. We tied strings on shoe boxes for cars and pulled them around. We made all sorts of furniture out of the cardboard which came in Daddy’s shirts from the laundry. 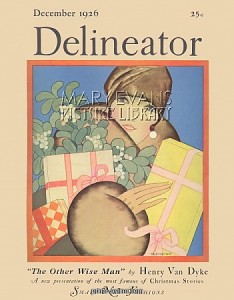 “We were just wild when Miss Zip Cain, Mama’s good friend in the piece goods department at Fountain’s, gave us one of the big pattern books with hundreds of paper dolls in it. I still cannot imagine a little girl growing up without the wonderful imaginary world of paper dolls. Mama had obviously loved them too because we still have some of the ones she cut out when she was a little girl in the 1890s.

“We played with dolls a lot too, especially Mary and I. We had all sorts of cute little doll furniture. My favorite was a doll named Sue, who still sits in a little rocker in our front room. Mama had found Sue and her two girls (smaller versions) at Hoffman’s Ten Cent Store. We would seat them in little wicker doll chairs and on a little wicker sofa. We have read recently that they are called Alabama Babies and were made by a lady in Alabama. They have become very collectible and if in good condition (which ours are not) have sold for as much as $800. 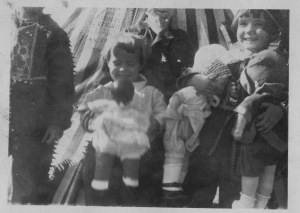 “One Sunday afternoon while Mama and Daddy were resting and reading the paper, we decided to take all of our dolls outside to play. Daddy had a long old car called a Hupmobile. At that tim all the cars had running boards which you stepped onto climb in since cars were high off the ground. We rowed all our dolls out on the running board side of the car. A little while later Daddy decided to go to the Elks Club for a little while and off he drove, dolls and all. Soon Mama got a call from Mrs. Sally Clements, who lived down the street, saying that Mr. Evans had passed her house and that when he turned the corner by the old cemetery dolls started falling off the running board and were scattered all over the street. They were rescued, but Daddy was a little embarrassed by the whole affair.” 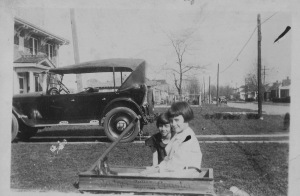 Rena and Mamie with Hupmobile in the background

The story about the tumbling dolls was one of our favorites as children. I never heard the details of the outcome, whether Jessie went galloping up Strong Avenue with her little Indians to retrieve the dolls or Howard got a frantic phone call at the Elks Club. I think of this episode often when going by the Old Greenwood Cemetery, with its scattered, leaning monuments and ancient cedars. Sara was fascinated by that cemetery and lamented the rough treatment it received by WPA workers in the 1930s. She described how they knocked over countless monuments, heaping them up in piles to be hauled away. What she didn’t lament, but which bothered me to no end, was the fact that our City Park was built over a black graveyard. The entire burial field, black and white was once one large plot, before Leflore Avenue sliced through it. So during our days of penny carnivals and Girl Scout meetings and frolicking in the shallow wading pool and end-of-school picnics, we were “dancing on graves.” Literally.

When we cleared out Sara’s house on East Adams, the hardest part was not the packed-t0-the-rafters attics or the pantry with enough bags and boxes of sugar to feed a third-world country for months. It was the “front room,” once mine and Cathy’s bedroom but for many years the “doll room.” All of the dolls that Sara mentions in her memoirs, for the most part, had taken their rest in that little bedroom, along with her own doll creations, and it was that space that brought her the most comfort as she aged. It was a magical place, a sanctuary for one whose imagination imbued each of them with personalities and life stories and love. What a treasure.

Ed. note: Hupmobiles were manufactured from 1908 to 1940, and Greenwood’s dealership was actually in the Whittington Building, on the southeast corner of Market and Fulton streets. That building was originally the Greenwood Post Office and was converted into office space after the new Post Office opened in 1911. Magnolia Motor Company carried Studebakers and Hupmobiles, and Howard Evans most likely bought his car there. In the photo above, it sits in the driveway which separated the Evans home from the Lois Aron Nurses’ Home. Notice how small the trees are, stretching up Strong Avenue. More on the Nurses’ Home later.

Mrs. Sally Clements was the model for the kneeling woman on the Confederate Monument; I’ll have to check to see which house she lived in on Strong Avenue. She earned a place in Evans lore the day the dolls sailed off the Hupmobile. 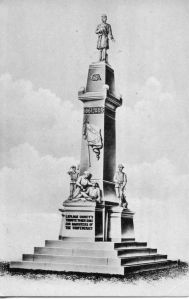 2 Responses to In Our Merry Hupmobile