“We always had a lot of flowers which Mama and Bama planted—zinnias, roses, marigolds and four o’clocks, which only opened up at four o’clock in the afternoon. We also had nasturtiums and sunflowers and hollyhocks. Bama had a garden which she enjoyed working in and she kept a cow behind the backyard in a space which was supposed to have been an alley but was not, so we got milk and she made butter in a big wooden churn in the kitchen. On each side of our yard we had high hedges which gave us some privacy from Miss Pearl and from the Nurses Home on the other side. These hedges were put to another use by Mama when she realized what good switches they made to use when we were bad. I don’t ever remember Mama spanking us with her hand, but she probably did.

“Those switches, though, would sure put red stripes on your legs. Then if the marks didn’t go right away she would worry that she had switched us too hard. Out came the bottle of mercurochrome which really made them stand out and we were embarrassed to go out because we knew that everybody would know that we had gotten a switching.

To add insult to injury, she sometimes sent Tiny out to get the switches, and Tiny said she always stripped the ones for me and Mary and left the leaves on her own so that it wouldn’t hurt as much.

“The summers were so hot that nearly all recreation was planned for outdoors. There were band concerts on the Court House lawn in the gazebo which now stands in the City Park, and everyone would go on the hot summer evenings. While the grownups listened to the music of the hometown band, we romped on the Court House lawn and drank water from the big stone fountain which once stood on the river side of the Court House. We played hide and seek in the bushes and especially liked to climb on the Confederate Monument and gaze at the statues.

1913 dedication of Confederate Monument; Jessie West somewhere in the crowd.

Mama told us that the Kimbrough family, who prided themselves on their Confederate background, had posed for the figures. She said that Mrs. Sally Clements (the lady who reported our dolls in the street and who was a Kimbrough) had posed for the one of a woman helping a wounded soldier. Mama told us about attending the dedication of the monument soon after she came to Greenwood in 1913 when Miss Bonner Dugan, who served as city clerk for many years, was queen of the celebration.” 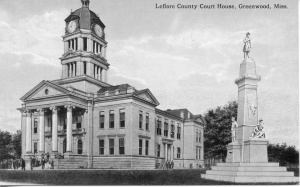 Flowers. Sara was an obligatory member of the Four Seasons Garden Club for many years, but the only active gardening effort I remember was a long, L-shaped row of daffodil bulbs that she planted in the back yard on East Adams. They actually bloomed, and she was so excited and proud. Daddy kept his counsel until the grass began to get high, and then he Snappered them into eternity. There were always ferns hanging on the back porch and pots of this and that along the carport, but I do believe that Criss’ Great Daffodil Massacre took all the horticultural spunk out of Sara’s psyche.

Switches. Jessie had hedges on West Claiborne, just as she had on Strong Avenue, or maybe they belonged to the Markel family next door. Regardless, it is utterly inconceivable to any of her grandchildren that she would have been capable of switching, paddling, spanking or whatever euphemism you might suggest. Jessie, our Granny, was blessed with perfect grandchildren. All 8 of us, without flaw or need for correction. Isn’t that amazing? But Sara knew better, and I have a clear memory of Cathy being sent down Granny’s driveway to secure one of the dreaded hedge switches when I had pulled something unacceptable. Shades of Tiny, it was like a live oak limb (or so it lives in my memory. Cathy may differ.) Sara was sparing in her physical punishment but an advocate for justice, followed by her guilt, so a spanking generally meant a trip to Woolworth’s later. Not a bad deal, all in all.

Sara also was a lifelong believer in the power of Mercurochrome. I don’t know if you can still even buy that vile concoction, but she would dash to the bathroom for the bottle every time there was a scratch or a scrape. It had a little plastic wand built into the cap and the reddish-orange gunk would never stay put. It slid down your leg or your arm, leaving a snaking trail of shame for all to see. And if the leak hit your socks, it was all over. No amount of washing was going to remove that pinky-orange ring on the elastic. The chemical name for Mercurochrome (brace yourself) is Dibromohydroxymercurifluorescein Sodium. Much more lethal than Syrup of Pepsin or Calomel and hopefully banned now.

Sara was downright wistful when talking about those hot summer nights on the Court House lawn. Imagine: That great building, just twenty years or so old in the mid-1920s and still its original size, must have seemed like the Taj Mahal to a little girl who had never been beyond the bounds of Greenwood. The gazebo stood on the southwest corner of the grounds and was later moved to the northeast corner of City Park. That’s where my memories of it begin. Octagonal (or maybe hexagonal), with wide stairs leading up to a wood floor, surrounded by a white railing. There was a little trap door in the ceiling, and I recall many days at City Park when I would stare up at that door and wonder what was hidden there. In one of the worst cases of civic neglect possible, the old bandstand was allowed to rot and was finally demolished a few years ago.

And the Confederate Monument. Sara loved that odd collection of statues and would let me climb on it after one of our trips to the Supervisor’s meeting or the jail in the Court House (Yes, the jail…..when you’re the reporter’s kid, you go everywhere. I never thought it was odd until I realized that everyone didn’t grow up with a steno pad and a Yashicamat.) She would tell me about the Star of the West and Sally Clements posing for the statue and Jessie, her mother, being in the 1913 crowd as the monument was unveiled. To her, those stone figures were as much a part of her childhood as Miss Pearl, Mable Petty and Bama. In later years, as she covered the Civil Rights marches, she was usually reasonably calm about the events roiling our little world, unless the demonstrators climbed the Confederate monument. That transgression would send her into a tizzy, as if they had marched into her own home and spit on the kitchen floor. Someday, I’m afraid, the Political Correctness Police will take the statues away, and I’m glad Sara will never see that.

One blistering hot day last summer, I guided the Columbus Marble Company workers to Sara’s gravesite in Odd Fellows Cemetery. They carefully unloaded the marker and placed it next to Russell Criss’s. The same marble works that created Sara’s beloved Confederate monument carved the epitaph into her tombstone, a quote from her buddy Allan Hammons: “She was Greenwood.” How true.

Ed. note: The Leflore County Courthouse’s original section was completed in 1906 and replaced the first courthouse, which stood on the northwest corner of the lot and was demolished in the early 1900s. Chattanooga architect R.H. Hunt designed the building (as well as First Methodist, Davis School and the Elks Club.) Two houses were torn down and one moved to another location to make room for the new courthouse, which was completed in just 15 months’ time. Five thousand people attended a barbecue and political rally at the dedication. In 1927, Frank McGeoy designed an extension for the north side of the courthouse, which probably eliminated the stone water fountain that Sara describes. In 1952, east and west wings were added to the original south facade.

The Confederate Monument was a UDC project spearheaded by Lizzie George Henderson, who donated the Westminster Chimes for the Court House tower in 1934.[ As of this past weekend, they were actually working.] Columbus Marble Works, which crafted thousands of Confederate soldiers for monuments around the state and the South, was awarded the contract. Stipulations included four male figures and two female, including a “sure enough woman” for the praying figure. No angels or mythic figures for this bunch of UDC matrons. The photo above shows a circle of veteran’s grandchildren unwinding the ribbons and onlookers crowded onto every inch of the Court House lawn and even standing on nearby roofs. The Whittington Building is seen behind the monument, having recently been converted from the post office into businesses. The steeple of the Episcopal Church is visible in the background, and the house on the right side of the photo was torn down for the building that now houses Dawkins Office Supply and Abraham and Rideout Law Firm. Notice, too, the bandstand and musicians in the foreground. My wish is that we could zoom in enough on these faces to spot a young and thrilled Jessie West, fresh off the farm and maybe even “sparking” with that cute Howard Evans. Wouldn’t that be something?

4 Responses to Memories in Marble