Fun with the Funny Papers

“Since there was no television the comics (funny papers we called them) were the nearest thing we had to cartoons. On Sunday morning we would fight over that section of the Commercial Appeal. 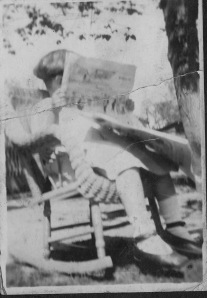 Tiny with the Sunday paper

“We would sit in Daddy’s lap, and it was his job to read them to us before we learned to read ourselves. Some of our favorites were The Gumps, Katzenjammer Kids, Mutt and Jeff, Gasoline Alley, Maggie and Jiggs, and Little Orphan Annie. I especially liked Gasoline Alley, which featured a boy named Skeesix who had been left on the doorstep when he was a baby.

Back then it was not too unusual to hear of babies being abandoned on a doorstep, and in some cases the grownups whispered their suspicions that the person on whose doorstep the baby was left might have been the real father. Years later they would point out the resemblance.” 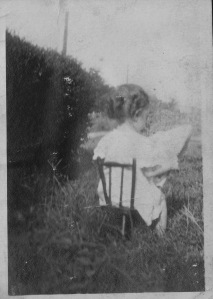 Mamie's turn with the funny papers

Irony upon irony. Sara’s first reading memories are from the Memphis Commercial Appeal, where her byline would appear over and over again for almost thirty years. The rhythms of that newspaper, its deadlines and its arrival each day, dominated my childhood like a metronome, and I, too, remember Sunday morning laps and “the funnies.” Sara read Gasoline Alley to us, along with Peanuts (loved it), Little Orphan Annie (despised that one) and Prince Valiant (the absolute worst). As I was learning to read, Sara would hand me her torn-off teletype sheets and tell me to “proofread” them; it seemed the most natural thing in the world that her words on those yellow tearoffs would be in black-and-white for all the Midsouth to read the very next morning.

She told me the tales of abandoned doorstep babies and even named names, but I will keep her counsel on those scandalous days. And, just so you’ll know, a “Skeesix” is a cowboy term for a motherless calf.

2 Responses to Fun with the Funny Papers