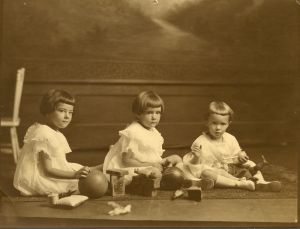 Only Tiny shows the slightest hint of a smile. Mamie looks very pensive and Sara is stunned. What in the world was going on behind the camera? In their casual shots, these girls are generally all giggles, but they had been dolled up into submission for this session. And only Sara could love a doll as creepy as the one in her lap.

Did Mrs. Spurrier discourage smiles? Or did we just have a naturally solemn family?

Howard Evans and his girls

This was one of Sara’s favorites, as it is mine. An interesting study in hairstyling contrasts: Tiny has been pincurled and primped, Mamie with bangs like a tiny flapper, and Sara appears to have had a kitchen bowl and scissors applied to her hair. Still no smiles, but the girls are safe with their father. I believe this picture must have been take a few months or a year before the one above. And isn’t it odd how Mrs. Spurrier captured Howard? He’s not really looking directly at any of the girls, but the effect is one of complete contentment and paternal calm, gathering them in toward him for protection. A kind and gentle man who would have been a perfect grandfather.