“Sometimes Big and Bama and Mama would take us to Holmes County where they had grown up about six miles southwest of Durant. We would go to Macedonia Church, a small country church which they had attended and where some of their family were buried. We would take a picnic and pick black-eyed Susans, little yellow flowers with dark centers which grew everywhere. They would reminisce and tell stories about the past. Mama told us lots of stories about her schoolmates, who had names such as Willie Cooper, Alma Pritchard, Thela and Venable. Some of them were her cousins.

“She loved to brag about her Daddy’s family, the Wests, who before the Civil War had been one of the more affluent families in the area, and about Uncle Madden West, who had been president of the Mississippi Central Railroad (now the Illinois Central), a candidate for Vice President and a general during the Civil War. She would tell us about her Daddy, who was at Ole Miss with his horse and slave when the war started and how he left there to join the Confederate Army. 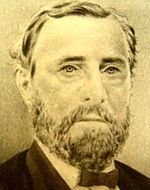 “Their family, like most Southern families, did not recover financially after the war, and her Daddy apparently struggled to make a living out of the poor hill country of Holmes County. She pictured him as a disillusioned person, better educated than her mother and probably bored with the life he led. He was 48 when he married and 53 when Mama was born. Mama was always sorry for him because he had been deprived of the way of life he had always known.

“There were twelve children in his family so Mama had loads of first cousins. She liked to tell us about her childhood and how she and T.C. played together and how she loved her dolls. She said they didn’t get much for Christmas each year but that she was excited to get a book, a doll, and some oranges. They read the Commercial Appeal, their only source of news, but the news was about a week late when they got it. They would go to Durant or Lexington in a wagon pulled by horses.

She liked to go to Lexington to see Aunt Sally because she and her family apparently fared better than my grandfather West. Aunt Sally would send Mama books.”

There are several old homesites on our Holmes County property, just west of West, and my son found another section of brick foundation last week that will have to wait until the snakes hibernate before we can explore it. I sit on the pier and look around at this breathtakingly beautiful land and wonder about my West and Sproles ancestors, who came to Mississippi on a wing and a prayer. They wouldn’t have chosen the land we have, as its soaring hills and heavy forests would have been useless for cotton or cattle, but I know they were close by and remain in this oft-maligned corner of Mississippi in spirit. Jessie, my grandmother, never lost her wistful memories of Durant and Castalian and those trips into Lexington. There was a little store on Highway 17, near the Franklin mansion at Flowers (and that was Flowers….there was nothing else. When the mansion burned, Flowers, Mississippi, vanished.) Jessie would tell me stories of stopping their wagon there and going in to get sugar cookies, then continuing on to the metropolis of Lexington. On one of my college drives from Greenwood to Jackson, I took a picture of that old store and the Lexington courthouse and had them framed for Granny. She cried when I gave them to her, and I think those tears were as much from knowing that anyone still cared about that lost world as from the memories that they invoked.

When you drive past the Franklin House site in late February or early March, the slope is covered in bright yellow daffodils. Somewhere southwest of Durant, I suspect daffodils sprout every year in the dirt where Jessie and Big and T.C. played, and I hope whoever owns that spot picks them and enjoys them and knows that this is sacred ground.

Ed. note: Other than a sketchy connection to Lord Delaware (which my father found hysterical), our only illustrious ancestor was Absalom Madden West, Jessie’s great-uncle on her father’s side. “Uncle Madden” opposed secession but wound up as a brigadier general in the Mississippi militia and later served as president of the Mississippi Central Railroad as it was being rebuilt during Reconstruction. He lived in Holly Springs for many years and provided our family with our only Greek Revival connection, the Salem Street mansion now known as Athenia. The photo above was found on Wikipedia and I have serious doubts about its validity; it looks more like Ulysses S. Grant to me, and he was definitely not a relation.