Beauty is in the Eye of the Beholder

Sissie, Bigma and Bama in rear; Big and Jessie in front; Anderson West cut out of photograph on right edge

[Note: For those who may have tuned in late, here’s a primer on Who’s Who in Sara’s memoirs. “Mama” is Jessie West Evans, the mother of Sara, Tiny and Mamie (and later, Son and Tricia). “Big” is Olive West Stott, Jessie’s older sister and Sara’s aunt; her husband was “Uncle Roy,” Roy Stott. “T.C.” is T.C. West, Jessie’s brother, who died before Sara was born. “Bama” is Thedorene Chavis West, Jessie’s mother and Sara’s grandmother. “Bigma” is Margaret Sproles Chavis Alexander, Jessie’s grandmother and Sara’s great-grandmother. I hope that’s helpful. The rest of the characters in this blog are as much a mystery to me as they probably are to you. Good luck.]

“One time Bigma’s sister Pan and Bigma went with us [to Holmes County]. When we got to the old home place Mama would show us where she and T.C. played under a tree, and she told about the one room school house where they went each day. At one time the teacher lived with them. They would walk some distance to the school and take a lunch with them. She always remembered the sausage biscuits.

“Bigma’s sister, whom they called Sissy, did not live far from them in a log house. Mama loved Sissy and once wrote under a picture of her, ‘our beloved Sissie, Miss Sarah Jane Sproles, older sister of Bigma. Was never known to do or say anything unkind. Her life was dedicated to caring for her parents and younger sisters and brothers, their children and grandchildren, and she was adored by all. She saw her only three brothers march away to war, two to be killed and one returned in broken health to not live long. She was never heard to complain and was a true Christian. Lived with Bigma until death with heart attack in Durant about 1906, aged 72. Buried at Macedonia.’

“Bigma, Margaret Ann Sproles Chavis Alexander, was born October 5, 1845 in Holmes County. Bigma was thin and would never have won any beauty contests. The lines in her face probably portrayed the hardships she had faced in her life. Her family had come from South Carolina to Mississippi in an ox drawn covered wagon before the Civil War and before she was born. One of the children, three-year-old Ann, died along the way and was buried somewhere along the road between Mississippi and South Carolina. 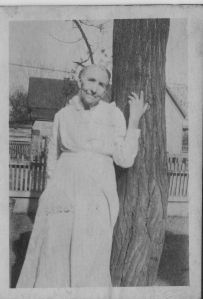 “Bigma had five other sisters and three brothers, two of whom were killed in the Civil War. She married Harmon Chavis, who died when their daughter (Thedorene, or Bama) was only thirteen months old. Later she married Henry Alexander, who died of tuberculosis in 1887. They had one son, Henry Ward Alexander (‘Bud’); he lived in Grenada, and I only remember seeing him on a few occasions. He and Bama were never very close.

“Bigma was funny, and you never knew what she was going to say because she said just whatever came into her mind. She dipped snuff, as did a lot of old ladies back then, and this greatly embarrassed Bama.

“Mama always told us that she (Mama) was reading when she was four and that she could spell everyone else down later on in school in Durant. We would tease her because when any of us did well in school or any of her grandchildren, she would remind us where those good minds came from. Though they did not have very much while growing up, Mama was very nostalgic about her life as a child and would often say, ‘I would like to be a little girl in the country again.’ I did not understand this until many years later when I realized that part of her desire was to go back to simpler times, with fewer responsibilities and worries, and maybe we all have a little of that in us when we remember those happy carefree days.”

If you live long enough, life always circles around to where you began, at least in your mind. Sara wondered at her mother wishing for a simple life again as a child in rural Holmes County. That meant, of course, crude housing, outhouses, limited cultural experiences, one-room schools and all of what we would consider extreme deprivations. But those very things meant serenity and simplicity to Jessie. For Sara, as she aged, the Strong Avenue bungalow and the Stott house on East Washington were her equivalents: Tangible reminders of a time when there were no insurmountable problems and life was sweet and safe and full of adventures and potential. I’m grateful that neither of those houses were torn down or even seriously neglected in her lifetime, because they held so many wonderful memories. We should all be so lucky.

6 Responses to Beauty is in the Eye of the Beholder