“The year before we moved I was in second grade with Miss Tallou Townsend as my teacher. It was an uneventful but happy school year, and I was still in the class with most of the friends I had made in first grade. At least by that time I had gotten over the daily crying spells.

“On September 30, 1927, Son [Howard McTyiere Evans, Jr.] was born in the hospital next door to our house on Strong Avenue. Mama had gone to the hospital after we were in bed, and Daddy, the proudest papa you ever saw, woke us up the next morning with the news. Since in those days children were never told where babies came from (I really thought the stork brought them) none of us even knew that Son was expected. We were in total shock as were some of the neighbors who had not been told either and just assumed Mama had gained more weight. I think Mama was always embarrassed to be pregnant. Those big aprons she always wore helped to conceal the fact. 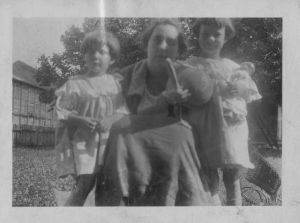 Jessie with Mamie and Tiny

“From the day he was born we adored him and could not wait for him to get big enough to walk and talk and wear cute little boy clothes like those on the paper dolls we cut out of the Sears catalog. Mary immediately asked, ‘Can he wear little sailor suits?’

When he was brought home from the hospital he was just like a doll to us. Daddy took Tiny and Mary and me to Stein’s Jewelry Store to buy him a little silver comb and brush.

Howard Street in the late 1920s; Stein's Jewelers is by the third car on the left ( the one that's not parked very efficiently).

His friends said they had never seen anyone so proud of having a boy. I guess after three girls he had about given up hope of having a namesake.” 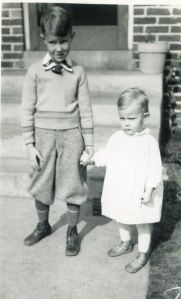 What would you expect of a young man who was the firstborn son after three girls, sprung on those girls like an early fall Christmas present, dressed up and doted on and all but worshipped in his adorable little manliness? The answer to his father’s prayers, surrounded by women who pinched his cheeks and cuddled him and assumed he could do no wrong? Wouldn’t you expect trouble coming like a runaway freight train down that line? Seems likely to me that this should have produced some insufferable, overly entitled merger of Little Lord Fauntleroy and Jay Gatsby. Howard Evans, Jr. was so special within this family that none of us, of any generation, ever called him “Howard.” To each and every one of us, he was “Son.” With a capital “S.” He was The Son, long anticipated and crowned at birth. And any of you who knew him know that he somehow survived the early adulation and rather unconventional childhood to become the kindest, gentlest, most compassionate gentleman imaginable. To this day, as I reintroduce myself to Greenwood and the Delta, dropping his name as my uncle unlocks doors and lights up faces with fond memories and devotion. He touched so many lives and quietly helped so many people through tough times (family and friends and strangers) that he remains a symbol of all that’s gracious and kind in this town.

Sara’s feelings towards her brother are obvious in that photo at the top of the page. That isn’t one of those posed sets where you just know the mother is saying, “If you don’t put your arm around your little brother, there will be hell to pay when we get home.” No, this is two children who are clearly buddies and confidantes, and they would remain so until his all-too-early death from pancreatic cancer. Sara filled most of a scrapbook with clippings of his civic and professional honors. Son’s portrait hangs in the newest wing of the Greenwood Leflore Hospital, named in his memory after decades on the hospital board, and Sara would invariably point him out to whichever nurses’ aide was pushing her out to the car in her last months. “That’s my brother,” she would brag. “Doesn’t he look like Mama?”

Tricia, Sara, Son, Mamie and Tiny, some Christmas Eve in the early '60s.

Ed. note: I actually found Tallou Townsend on a geneaology site. She was born in 1890, so she would have been around 37 when she was teaching Sara’s second grade class. She later married and died in Winona, where she is buried, in February 1976. Dealing with Sara probably shortened her natural lifespan.