Tiptoeing through the Tombstones

“Daddy left his job at the Buckeye Oil Mill and opened up a cotton brokerage office on Howard Street in about 1927, but the next year accepted a job as manager of the Delta Cotton Oil Company in Jackson, and we learned that we would sooner or later be moving to Jackson. Mama, who I am sure did not want to leave Greenwood, decided that she and the children should stay in Greenwood during the school year of 1928-29 and then move to Jackson in the summer of 1929. 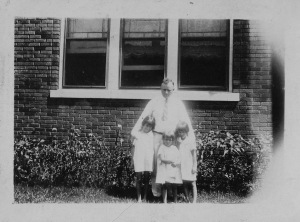 Howard with Tiny, Sara and Mary at the Strong Avenue house

Capitol Street, Jackson, circa 1930. The Walthall Hotel was about halfway down the street on the left.

“Mama learned to drive the car and transported us to and from school when we didn’t walk. We came home for lunch every day. When we walked to or from Davis School we usually cut through the old Greenwood Cemetery where the early settlers of Greenwood were buried. I thought it was kind of spooky going through the cemetery, but that was the shortest route home. Most of the tombstones have since crumbled or were knocked down during the Depression when people hired by the Works Progress Administration [WPA] hit them with the mowers. It was said that the city built a goldfish pond with some of the stone at the old City Barn. 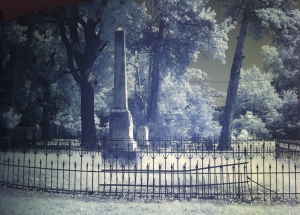 “There are few markers left out at the cemetery today, but Mama said she had been told that there was someone buried under every inch of the ground. The black cemetery had been across the street where the City Park is now. There are forty Confederate veterans buried in the old Greenwood Cemetery.

“Just past the cemetery was Feaster’s Store, a small operation run by Mr. Feaster. It was a real treat to stop by there on the way to or from school and to choose candy from the various kinds stored in big glass jars on the counter. The ones I liked best were marshmallow type hands with a gaudy ring on one finger. Of course, I didn’t really like the chalky tasting hand as much as I did the ring. It was just like buying the Cracker Jacks for the prizes. We would buy winding balls, which changed colors as you sucked them, and all day suckers, which were made of a caramel like candy which took hours to consume, thus giving them their name.”

In this day and age, it’s difficult to imagine a world where three little girls could walk home for lunch every day, much less one where the Old Greenwood Cemetery was merely creepy and not downright dangerous. It was a logical route, though, off the campus at Davis School, down Church Street, over the concrete steps by the big curve in the road and past the markers that dated back to the 1840s. Then a few blocks down Strong Avenue and into the safety of the brick bungalow for a quick dinner. I can just see Tiny leading the Evans pack, no-nonsense, on a mission, and probably mortified to have Mamie and Sara trailing along, certainly if Sara was sucking on one of those hideous candy hands which she describes. Sara tended to dawdle when there was sugar involved, and if that trait made Tiny furious, well, so much the better. If Mamie got candy, it was carefully wrapped and tucked away for later enjoyment, much to Sara’s everlasting regret.

As has been mentioned before in these blogs, the Old Greenwood Cemetery is still there, but more in spirit than reality (pardon the pun). If, indeed, every inch of space held a grave, as Jessie claimed, no more than a tiny percentage of those graves are now marked. The 1906 iron fence, paid for by public donations, was taken down in 1994 and the vandalism and disrespect for the cemetery increased dramatically. And I don’t even want to think about a goldfish pond lined with tombstones at the City Barn. Even in a town noted for its quirkiness, that’s a bit much.