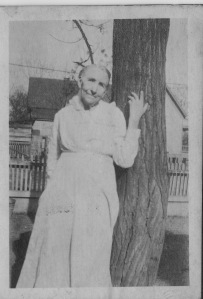 “In the fall Bigma came to visit us and while she was there she died in her sleep one night in October, 1929. They took her back to Greenwood to bury her on the lot where T.C. was buried.”

October, 1929. Rings a bell, doesn’t it? America had been riding the crest of the “American Century” for many years and it seemed there was no end to the money to be made or the fun to be had. And then it stopped, like a Model T hitting a concrete embankment. The stock market plunged just a few days after Bigma’s death, but that seismic shock likely didn’t even register with little Sara. And I doubt that Howard and Jessie had much money, if any, invested in stocks, so the slow slide into Depression was a national event that would only reveal itself in retrospect. Cotton was still being picked and the seeds still had to be crushed, so Howard was in no danger of joining the sad lines of the unemployed that would soon be an all too frequent sight around the country.

But losing Bigma did register. Margaret (and how many years had it been since anyone had called her that?) was a woman of another century, the last living link to the brave (or foolish) forebears who lit out from the Carolinas and Georgia and Tennessee for unpredictable lives in a brand new state, Mississippi. She had survived indescribable hardships in rural Holmes County during the Civil War and said goodbye to two brothers who vanished in faraway battles. She buried two husbands, bore two children, struggled to make a living on often unforgiving land and followed her daughter and granddaughters and grandson down the hills to Greenwood in the first years of the twentieth century. She went from oil lamps to incandescent bulbs, from buckboards to Hupmobiles and from icehouses to General Electric refrigerators. For Sara and her siblings, Bigma bridged a chasm between their modern world of RCA and flappers and Snickers to a forgotten time of dogtrot cabins and dying soldiers. When Bigma slipped away in her sleep on Robinson Road, a chapter in our family closed forever, and Sara was probably the last of the Evans clan who carried any personal recall of Margaret Sproles Chavis Alexander.

If you’re born in 1845 and someone still carries fond memories of you in 2009, as Sara did of Bigma, you have made your mark on this world. We’ll just keep “handing her down” through the generations, weaving the threads together in an indelible knot.