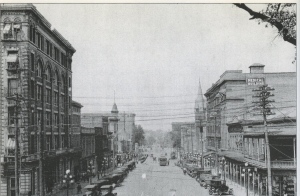 Capitol Street, Jackson, looking west from the Old Capitol balcony. Kennington's is in the distance on the left, Kress' Dime Store a bit closer on the left, and the Century Theatre near the Baptist Church on the right.

“We were very excited about living in a city and spent the summer taking everything in. There were three theaters, the Majestic, the Istrione and the Century, and they were all bigger than Greenwood’s Paramount. 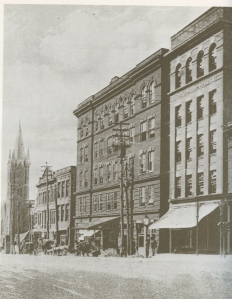 The first one we went to was the Century, which had a place next door where you could get fresh orange juice. Then on the corner there was a big drugstore with a soda fountain.

“Livingston Park on West Capitol Street was one of our favorite spots, and we went there often to the zoo and the park. There was a big manmade lake and a bathhouse and that was the only place to swim. We enjoyed getting in the water, but Mama was always close by screaming at us not to go out too far. 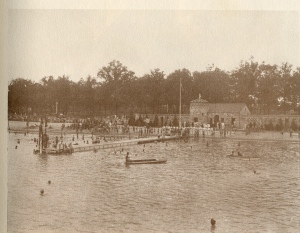 Livingston Park lake and bathhouse, right by the Jackson Zoo

“Capitol Street with all of its stores was as much fun for Mama as it was for us. There were two big department stores, The Emporium and Kennington’s, right across the street from each other, and the best part of all was the choice of three five-and-ten cent stores, Woolworth’s, McCrory’s and Kress’s. 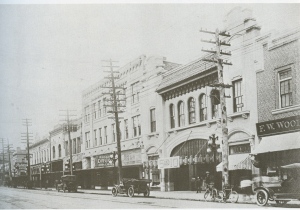 “We would make them all when we went to town, and I spent much of the time tugging on Mama and begging for something. The only thing that would stop my pleas for a new paper doll book or a doll or something else I had spotted was the look she would give me when she raised one eyebrow and frowned, and then I knew she meant business.” 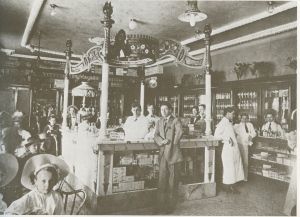 The Hunter and McGee Drug Store, just across Capitol Street from the Century Theatre; this is likely the one Sara described with the soda fountain.

Sara’s first love was F.W.Woolworth, and she carried a torch for him throughout her life. My memory may be skewed, but I seem to recall that we went to Woolworth’s on Howard Street every single day when I was a child, and she would wander up and down the aisles, picking up this and that, admiring the candies, marveling at new additions. For her, a dime store was Disney World and the State Fair and Coney Island rolled into one big ball of delight, much more so than the giant department stores like Kennington’s or the Emporium.

So imagine her anticipation for those Capitol Street trips, as Jessie (and maybe Howard? Somehow I doubt it…) shepherded her gang of four up and down the city blocks, zipping into Woolworth’s and McCrory’s and Kress’s before settling into the dark magic of the Century or the Istrione or the Majestic for cartoons, newsreels and the latest drama with Clark Gable or comedy with Jean Harlow. Then off to the drug store for a soda or milk shake or ice cream. The Depression may have been deepening in those years of 1929 to 1932, but the Evanses seem to have not felt it. Knowing Jessie, I suspect that Sara got most of what she tugged elbows for, as did Mamie, Tiny and Son. Jessie was a softie and her devotion to her children knew no bounds. Jackson was not her natural environment, to be sure, but she was going to be certain that her kids experienced all the wonders that the big city had to offer.

Ed. note: Livingston Park grew out of 79 acres which the City of Jackson purchased on the western edge of the city in 1916. About that time, the firefighters at the Central Fire Station (now the Jackson Chamber of Commerce) began acquiring small animals and exotic pets, which led to predictable chaos in the firehouse. In 1921, a zoo was carved out of the Livingston Park land and the menangerie was moved to the new location. The WPA constructed many of the still-existing structures (the Elephant House, Monkey Castle, snackbar, etc.) and laid out the various habitats for the rapidly growing collection. The neighboring Livingston Park Lake was a popular swimming site, complete with beach, bathhouse and diving tower (which is the only surviving structure), but somehow I doubt Jessie let the girls and Son go very often. She had a serious water phobia, and I just can’t see her sunning in a folding chair while her children risked their lives in Livingston Lake. But the Jackson Zoo remains a sentimental favorite in this family, as Sara’s granddaughter Emily and I went almost every day during her toddler and pre-school days, and Sara’s great-granddaughter Charlotte celebrated her first birthday at the picnic pavilion between the Elephant House and the Monkey Castle this past February. Sara would have been proud.

Kennington’s and the Emporium were true grand-scale downtown department stores, on opposite corners of Capitol and Congress Streets. The Kennington family actually opened a “branch” store in Manhattan, such was their success and ambition. By the late ’60s both stores had closed or been bought out by McRae’s, the dominant department store in Jackson and throughout Mississippi at the time.

Below is a link to a wonderful history of Jackson’s movie theaters, by Jerry Dallas, published in the 2007 Journal of Mississippi History. He writes, “The Century Theater became a Jackson landmark. Jacksonians who grew up with the Century, established in 1901, remembered it most fondly as a real theater, one that provided Jackson with the best touring stage attractions. But its life span as an exclusively live theater was relatively brief. By the fall of 1913, the Century began to show movies between its live stage performances, and films eventually became its major bill of fare. The Majestic was the most long-lasting of Jackson’s early movie theaters…on the north side of East Capitol between North Farish Street and Town Creek….[after moving] the Majestic cost $40,000 and had a seating capacity of 1250…..immediately to the east was a ‘Woolworth five, ten and twenty-five cent store.'” Sheer heaven for Sara Evans.