Old Woodrow Wilson Bridge (1925), which led from downtown Jackson to the Gold Coast

“On Sunday afternoons Daddy would take us for a ride, usually on some dusty gravel road which led to Van Winkle or Pocahontas or some other nearby spot. We always got ice cream or a drink, and sometimes he would ride us out in Rankin County past the Gold Coast. This was a strip of joints which sold whiskey and where a lot of gambling went on. It was not legal to sell whiskey in the state at that time, but there were bootleggers on almost every corner who sold it, and the sheriffs got rich with payoffs. The job of sheriff was one of the most sought after of any of the county political jobs.

“Rawa [Rena Stott] and Buddy [Roy Stott, Jr.] came to visit us, and Big brought John down several times. [Big was Sara’s aunt, John her cousin and Rena and Buddy’s little brother]. There was a terrible flood in Greenwood in 1932, and the Stotts came to stay with us while Uncle Roy stayed behind to help fight the flood which they were afraid might even affect their house. 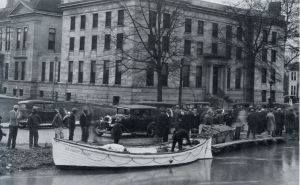 All of North Greenwood was under water, with both the Yazoo and Tallahatchie Rivers overflowing. The only way you could go down Grand Boulevard was by boat. The Coast Guard was sent in to help. 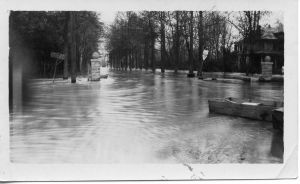 Grand Boulevard, looking north from Keesler Bridge, during 1932 flood. The house on the right stood where Dr. Bill Jones' office is now.

“While they were there Mike Conner was inaugurated as governor. Daddy had been a big supporter of his. Daddy was always interested in politics, and in nearly every race was working for one candidate or another. 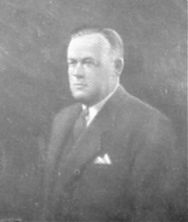 “Mama always said she hated politics, and it would make her mad because he got so involved. One time he took us up the street to Poindexter Park to hear Bilbo speak, when he was running for governor. Bilbo was a strong segregationist and was advocating that we send all the Negroes back to Africa.

“He always got the ‘redneck vote.’ Daddy would never have voted for him but just wanted to see what he was going to say. He was a small man who always wore a red tie and made fiery speeches. He was governor for one term and later served as a U.S. Senator and brought a lot of negative publicity to the state.”

Sara witnessed a lot of Mississippi history in her 88 years. The infamous Gold Coast, floods, and political shenanigans: All a part of our textbooks now, but a very vital and real memory in her lifetime. She found politics fascinating, if maddening, and just abhorred windbags who made Greenwood or Mississippi look bad. Even as a child, she knew Bilbo was a disgrace. Ross Barnett and Cliff Finch and a host of local politicians were on her black list for public nonsense and unfortunate decisions. She wasn’t much of one for sending money to those running for office, but if you had her trust, she would burn up the phone lines for your cause. I miss her input during this state election year.

Ed. note: Theodore G. Bilbo was, frighteningly enough, elected Governor of Mississippi twice. The little peckerwood (sorry, there’s no word any kinder than that) from Pearl River County was a Vanderbilt dropout who rose to prominence in the hotly contested 1910 fight over a Senate seat between LeRoy Percy and Greenwood’s James K. Vardaman. Bilbo, as a state senator, accepted a bribe to vote for Percy and was reprimanded by the Senate, which called him “unfit to sit with honest, upright men in a respectable legislative body.” Sadly, the voters disagreed. He was elected Lt. Governor (after a rival broke a cane over his head), then Governor (1916-1920). He was elected Governor yet again in 1928, the term when he famously fired the presidents of Ole Miss, MSU, MSCW and the Ole Miss Medical School, replacing them with a real estate agent, a press agent, a recent college graduate and someone who had taken a course in dentistry. All the schools and USM were disaccredited. He was later elected to the U.S. Senate, where his mischief continued. Why is there not a book about this character?

Martin (“Mike”) Conner was the anti-Bilbo, elected Governor in 1932. The 41-year-old Yale law graduate took over after Bilbo’s disastrous reign,  with a bankrupt state treasury and $13 million in debt. He rescued the colleges and sealed his own political doom by promoting and having the legislature pass a state sales tax law. Two later gubernatorial bids were unsuccessful and he later served as commissioner of the Southeastern Conference. A remarkable man in many ways, and one that Sara always admired.