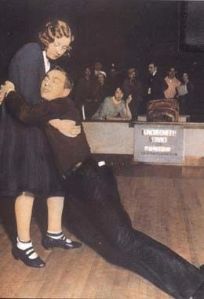 Not the Livingston Park marathon, but you get the idea.

“During the ’30s the craze was endurance contests where people would see if they could set a record for doing something longer than anyone else. They sat on flagpoles for days at a time, or danced for twenty four hours without stopping, or skated, just anything to try to outdo anyone else. A boy who lived on a little street off West Capitol Street decided to see how long he could sit in a tree. After a number of days living in the tree he was honored with a parade down Capitol Street. A tree had been placed on a truck, and he rode down the street sitting in the tree. I can’t remember whether or not there were some other boys who also stayed in the tree. There was almost a traffic jam on his street sometimes as people rode by the house to see if he was still in the tree.

People all over the country were getting into the act. In Greenwood, Billy West Bell tried swinging on a little airplane swing on his porch on Henry Street. It really was funny the things people were doing to get attention. We went over to Livingston Park to see couples who had been either skating or dancing. I can’t remember which, but they had been at it for a number or hours and some looked as if they were going to pass out.”

I find it hard to believe that Sara, Mamie and Son didn’t at least try some sort of marathon stunt (Tiny would have been too far beyond their schemes by this time), but perhaps not. If it would have earned Sara a parade down Capitol Street, she would have stood on her head for a week.

Ed. note: I couldn’t find anything on the Jackson boy who earned a parade by perching in a tree for several days, but this came out of a Waco, Texas newspaper:

“In July 1930, the Waco News-Tribune carried headlines about “Every Tree now Potential Bean Stalk for Jack” and “Police Officers out on the Limbs” seeking to remove from trees kids in such towns as Fort Worth and El Paso who hoped to set the tree-sitting record.

They had been inspired by Jack Richards of Kansas City, who endured 156 hours — or more than six days — in a tree before he called it quits.

The News-Tribune reported that the youngster, a 94-pound Boy Scout who looked like he was “out to try anything for glory,” had a support team made up of pals Sidney Carlisle, Keith Burns and Maynard G. Darden. The trio sent up three meals a day, made by Frank’s enthusiastic mother, in a basket on a rope. Some even climbed up to his quilt-lined and book-laden platform to play a board game to help him while away the hours.

Frank’s father told reporters that he’d offered his son a $1 per day incentive for each day past the record Frank could make it.

A day later, two female rivals took to the branches. Frances Coates, 11, and Mildred Fraser, 13, with a black and white kitten for company, climbed a tree at 502 Dallas St. and nestled among blankets and pillows stuffed in the crotches of a box elder. Their support team was composed of friends Mildred Yarbrough and Marie Stewart.

And what did law enforcement make of all this?

Waco Police Chief Hollis Barron told the News-Tribune, “If they’ve got that little sense, let ’em do it.”

After Frank surpassed his Kansas City rival and logged his first 200 hours, the newspaper noted he had others aspiring to his throne: Wilbur Johnson at 2601 Fort St.; Obie Lewis at 1702 Columbus Ave.; Mary Souza at 1708 Webster Ave.; and duo Clover Lewis and Mary Louise Thomas (address not noted).

At hour 231, some 15 hours after securing the newest national record, the “volunteer Tarzan” — as Frank had been dubbed by the press — tumbled out of the tree at about 4 a.m. July 26, 1930. He broke his arm — and lost out on his father’s promised $1 reward by nine hours.