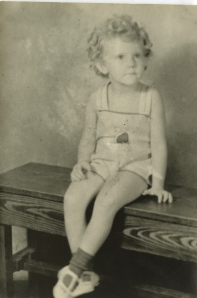 “Things changed at home during that last year in Jackson. Daddy was gone an awful lot. Mama was not well, and Bama had her usual ailments. Mama had gained even more weight and was having trouble with high blood pressure and having to go to the doctor a lot. She would have dizzy spells, and Bama would scream for us to run get the bottle of ammonia for her to sniff. In her last years we realized that when she would have trouble breathing, she was usually upset about something and hyperventilating. I wonder if maybe this was part of the problem that year.

“In June, 1932, Mama called us into her room one night and told us that she was expecting another baby in just two weeks. Again, we were totally shocked as were some of the neighbors. We were all excited and started making plans for the arrival. It is now hard to believe that I was eleven, Mary twelve and Tiny fourteen, and we didn’t even know she was pregnant.

“On a Sunday morning, June 19, Mama went to Baptist Hospital to have Tricia. It was a hot day, and we took Son to the zoo that morning to keep him entertained. That afternoon Daddy took him over to a little store by the oil mill to get a candy bar. Late in the afternoon a thunderstorm came up. It was a long day. Then the news came that we had a baby sister, named Patricia Ann by Tiny since so many of the movie stars of that period were naming their children Patricia.

“They were concerned about Mama because of her high blood pressure, weight, etc. Big came down to help us, and she and Bama were upset, and Mary overheard them saying Mama might die, promptly relaying that word to the rest of us. Daddy took us to the hospital sometime during the next day or two, and we could hardly wait to get her home, and when we did she had three big sister nurses. We gave bottles and changed diapers and fussed over who was going to hold her. She was pretty frail, and soon after Mama brought her home, Daddy gave blood for her to have a transfusion. We were frightened that something might happen to her.”

You have to give Jessie credit for subtlety. It’s understandable that Tiny and Mamie would have found nothing unusual in Baby # 3 (Sara) suddenly showing up, as they were barely more than infants themselves. But to be awakened in their Strong Avenue bungalow with the altogether unanticipated news that a brother had popped up in the night, seemingly out of nowhere? When they were, let’s see, aged 6, almost 8, and 9? And now yet another baby on the way, not with the normal 9 month waiting game, but just a few days. Good heavens, what must those girls have thought? They were 11, 12 and 14, and Son almost 5, and they knew their mother had been “under the weather” more than usual, but this revelation of Tricia’s imminent arrival surely left them with suspicious minds all their days. This is simply not how these things are done, but maybe you could get away with it in those long-lost simpler times. Regardless, that hot June day that seemed to be never-ending for Sara (and I’m certain for poor Jessie as well, as she seems to have been unceremoniously deposited at creepy old Baptist Hospital while her brood escaped to the zoo) finally reached its climax with the arrival of the family’s concluding act, tiny Patricia Ann. And her three sisters and her big brother adored her with no reservations whatsoever all their days. Sara could find fault with Tiny or Mamie for merely existing at any given moment, but Son and Tricia were her favorite dolls come to life, companions and confidantes and cherished friends through childhood and into their adult years.

And given that Tiny was assigned the responsibility of naming Evans Number Five, I suppose we should all be grateful that Hollywood’s finest weren’t naming their daughters something dreadful, like Jezebel or Minerva or Hepzibah. I still would have named my first child after Sara’s baby sister, but I suspect Hepzibah Emily Miller would have given me quite a bit of grief about that.