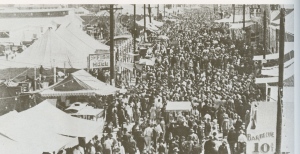 “Mama had to stay in bed for awhile after she came home, and a black woman named Ruth helped out around the house. We stayed at home a lot that summer, had a lot of tea parties, and when she was able, Mama made homemade ice cream in the afternoon. We had attended Bible School at Calvary Baptist Church, and they had let us make a quilt square, a Sunbonnet Baby in my group and an Overall Boy in Mary’s, so she and I spent a lot of time using the scraps left over from our dresses to make quilt squares. Mama showed us how to put them together, and that fall we entered them in the exhibits at the State Fair. Mine won a blue ribbon. Mary was competing in an older class so she did not win a ribbon.”

A Sunbonnet Sue design from the 1930s

Somehow it just makes me sad that Mamie didn’t win a ribbon. She was the most artistic of the three oldest Evans children, the one who crafted incredibly intricate Christmas packages and decorations and hand-painted Christmas cards each year. She could sketch off any subject you asked her to draw, without blinking an eye, just to delight you. Tiny was a talented artist as well, especially in her later years, and Sara was remarkably creative in many, many ways, but it was Mamie who strived so hard for perfection. And usually achieved it.

As the Summer of 1932 drew to a close, and Fall rolled around, the sheltered, almost fairy-tale life of the Evans children was soon to change. And maybe a blue ribbon in a keepsake box would have helped just a little.