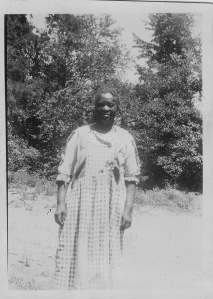 One of the black women who worked for the Evans family; regrettably, Sara did not identify her in this photo.

“We got a lot of our produce delivered to the back door during those years. People who lived in the country and had gardens would bring peas, peaches, corn, tomatoes and other vegetables around, and Big had a scale on which they weighed them to see how much you owed them. We always referred to these friends by what they sold. For instance, Mrs. S.L.Ball was referred to as ‘Mrs. Butter Ball’ because she brought butter among other things. Mr. Daves brought eggs and butter and vegetables, and he too was ‘Mr. Butter Daves.’

“Old Negro women would come to the door with a big flour sack slung over their shoulders filled with shelled peas or green beans. I don’t think they ever bought vegetables or butter or eggs from the store. There were several Negroes who roamed the streets and would stop by to see if you had any handouts or junk. One little wirey black woman was called ‘Aunt Aggie.’ It was she who first showed us sandwiches cut into two triangles, and we promptly called those ‘Aunt Aggie sandwiches.’ Then there was Hambone, a small little man who pushed a junk cart all over town. We always heard that J.P.Alley, the cartoonist for the Commercial Appeal for many years, modeled his Hambone character from our Hambone. His Hambone appeared every day in the paper with some clever comment in Hambone’s own dialect.”

“Then there was ‘Old Sam,’ another little black man who must not have weighed over 125 pounds but who could put away more food than anyone I ever knew. He did odd jobs around the house and yard and at noon Big would fill him up a plate of leftovers (all running together) that no one could believe he could possibly consume, but he always managed to eat every bite. We still refer to a plate full of food as a ‘Sam plate.’

“After Irma [the Stott’s maid] left, there was Laura, who spoke in a high-pitched voice similar to that of Butterfly McQueen in Gone With the Wind. Laura was a good maid but had one fault and that was that she would grab your plate before you could finish eating. Today I can understand why, when she had to wash all those dishes in a dishpan without even a dishrack to put them in. Anyway, when today [1990] I reach for Russell’s plate and he is not quite through eating, he screams, ‘Laura, leave my plate alone!'”

This is Butterfly, not Laura.

“Speaking of conveniences, we never owned a real ironing board but instead used a wooden board propped up on high chairs in the back hall. There was no way to slip a garment over it so you pressed on one side and then when you turned to the other you invariably messed up the side you had already pressed. All of the clothes were made from 100% cotton with no Permapress fabrics, and they had to be starched with a thick blue starch solution, sprinkled, and rolled up in a towel before being ironed.

“We had a Negro woman named Delia Page who sewed for us. She lived in a better than average house which was neat as a pin. She had several children  and was so concerned about their education and had even bought a piano so one could take lessons. She came to Uncle Roy one day crying and told him that a well known lawyer had tried to attack her while she was in his office to discuss business. I can remember Uncle Roy and Big going to another lawyer to try to get something done about it.”

What can be said except that Sara lived in a world that has vanished in many ways? This is a memoir, not a social commentary, and I can say with certainty that Sara never mistreated anyone of any color intentionally. Later on these pages you will meet Winnie Baskin and Will Henry and Paralee and Georgia Edwards and many more black friends who, pardon the pun, added so much color to our lives. My advice is to head out to see The Help, filmed on the same Greenwood streets that Sara loved, and realize that courage and compassion don’t always find their way to the bestseller list or the big screen.

Ed. note: This is from Wikipedia, so don’t consider it gospel:

Born in Memphis, Cal Alley was the son of James Pinckney Alley, creator of the syndicated cartoon panel,Hambone’s Meditations, and the first editorial cartoonist at The Commercial Appeal in 1916. The character of Hambone was inspired by J. P. Alley’s encounter with a philosophical ex-slave, Tom Hunley, ofGreenwood, Mississippi. Hambone’s Meditations ran on the front page of The Commercial Appeal. When the elder Alley died April 16, 1934, Cal Alley and his brother James took over Hambone’s Meditations. Pressure from Civil Rights groups brought the long-run cartoon series to an end in 1968.[2][3]