“I continued to attend Draughon’s. Then I got a part time job with the District Extension Office under a youth program known as the NYA, where the federal government paid me a huge salary of $11 a month to help them out. Meanwhile as a result of my Civil Service exam I was beginning to get more telegrams offering me jobs with the Farm Security Administration (later called the Farmers Home Administration) at the Stoneville Experiment Station near Greenville and at Key Field, an air base near Meridian. After several offers at FSA offices in rural areas, I finally decided to take one a Mayersville, a small village which was the county seat of Issaquena County.

“Mama hired a black man to drive Big’s car, and we loaded up all my possessions and headed to that remote spot which had little other than county offices and a few houses. Without a car, and not being able to drive if I’d had one, I would have been totally isolated with no way to even get home. It was a disappointing trip, but Mama and I both decided it would be best to head back to Greenwood with all my belongings.

“When I turned that job down they offered me one in Greenville, where I would earn $70 a month. So again in December, 1940, we loaded up and set out for Greenville, not knowing anyone or where I would stay. Of course, Greenville was a big improvement over little Mayersville, and I was excited and scared over my first real job. We found a room at Miss Annie Moore’s for $15 a month. 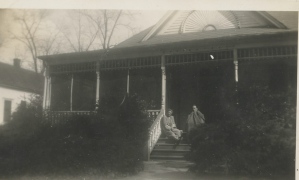 She was a delightful landlady, about sixty, and lived in the family home with big old fashioned high ceilinged rooms. It was less than a block from downtown Greenville and only a few blocks from the office where I would be working. The only bathroom had been added on to the back of the house, and I even had an old fashioned wash bowl and pitcher in my room since it was so far back to the bathroom. I shared the bath with Miss Annie and Mrs. Eulalie Johnson, who also had a room there.

Miss Annie and Eulalie, clowning around in the clothesline laundry.

“Miss Annie worked for the Welfare Department and was a fun person. Eulalie was  about forty and divorced and worked at one of the downtown banks. The two of them just took me under their wing since I was only nineteen and really on my own for the first time.

I wonder if these two little ladies realized at the time, or even years later, how much their kindness affected nineteen-year-old Sara? If they had been aloof or cruel, she would have fled back east on Highway 82 for the safety of Greenwood and family. Instead, she found a new home, if only briefly, on Greenville’s Shelby Street, and those few months would change her life forever. She was gone again by April of 1941 but I like to think that she stayed in touch with Miss Annie and Eulalie, and that they stayed as witty and impish as they seem to be in these photos.

Ed.note: Eulalie Johnson does not appear on any available Ancestry.com records, but Annie Moore was living in the same 113 Shelby Street house as early as 1930. Her mother, Eliza B. Moore, was listed as “widowed” and was already renting out rooms to lodgers. Annie was 47 at the time of the 1930 census, so she would have been in her late 50s when Sara moved in. On Google maps, the house appears to have been torn down and replaced by Methodist Church buildings, but I’ll just have to drive over to Greenville and see for myself.