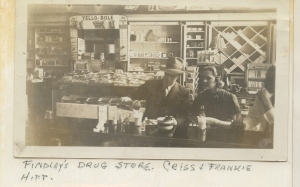 “Two men had rooms in the other side of the house, but they had a separate entrance and their own bath.

Leroy Hammett, one of the male boarders at Miss Annie's.

There was a boarding house, Mrs. Sharkey’s, where I could eat my meals if I wanted to, across the street, but I more often stopped by Finlay’s Drugstore to eat. I could eat three meals a day at the boarding house for $30 a month. When I ate at Finlay’s I could get a pimiento cheese sandwich, a Coke, and a wonderful piece of pecan pie for twenty five cents.”

“One reason I liked eating at the drugstore was everyone in there was so friendly, including Russell Criss, who was in charge of the soda fountain. He very quickly conned me into typing the stencils for his menus each day and finally, on New Year’s Day, 1941, borrowed one of the pharmacist’s cars and invited me to go get a sandwich. He lived just a few doors down from Miss Annie’s house in a rented room. We began having a few dates but were not going steady or anything. He had to work a lot at night since the drugstore stayed open until ten, and he did not have a car.

Eulalie Johnson and a Greenville policeman

“My first job almost turned into a disaster as the woman I had to work under, Bernice Pabst, was well known for her mean disposition. She immediately decided to take it out on me because I was young, and she knew she could get by with it since the boss, Rex Morphis, was like a big overgrown baby and had no backbone at all. He would let her get by with anything. The district director, Mr. Rich, knew how she was treating me so in April he asked me if I would like to go back home and work in the office there while the secretary, Olene Lary, took time off to have a baby. I jumped at the chance though I hated to leave Greenville where, other than at work, I was having a good time.

“I had been dating a boy named Billy Payne, who I had a date with the last night I was in Greenville. I asked Russell to get me a big box to pack some of my things in. When he found out I had a date he sent me the box but did not even say goodbye, and I did not figure I would be seeing him anymore.”

For those of you who read romance novels, no need to panic. This is going to turn out OK, trust me. It’ll just take a bit longer.