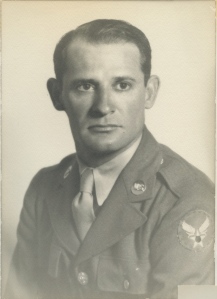 “My job in Greenwood was much more pleasant. There were three of us in the office, Mrs. Lillian Barron, home economist, Ramon Harris, the supervisor and thirty-seven-year-old bachelor, and myself. We all went to a district party together, and Ramon and I started dating. Of course he was too old for me, but older men had always appealed to me from the time I fell in love with my teacher, Howard Lewis, in the eighth grade. Looking back, maybe I was looking for a father figure since I had missed my Daddy so. Anyway, an age difference never bothered me.

“Meantime Russell had left the drugstore in Greenville and was selling Bruce’s Juices. He stopped by the house one day when I was at work so I did not see him, but got plenty of teasing from Mary about having a boy friend who sold Bruce’s Juices. By this time she was teaching in Itta Bena and coming home a lot on weekends. 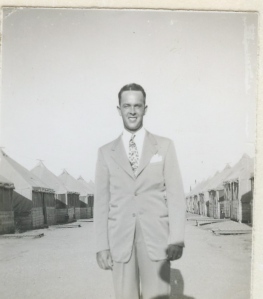 Russell at Camp Barkley, Texas. Sara's notation says this was his "first tailor made suit and last time in civilian clothes," so it must have been late 1941. He was 24 years old.

“Since his draft number was coming up soon he decided to go on and enlist, thinking all the time that a knee he had injured playing high school football would keep him out. Instead they grabbed him up and made him the leader of a group of selective service draftees leaving Greenville in June for Camp Shelby in Hattiesburg. I had not seen him since leaving Greenville in April and we had not stayed in contact. He had enlisted for what was supposed to be a period of one year, making $21 a month. From Camp Shelby he went to Fort Oglethorpe, Georgia and on to Fort Sill, Oklahoma.”