Gone for a Soldier 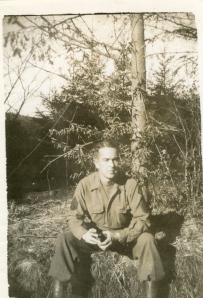 “It was very hot and dusty in Oklahoma and they were having to make long hikes with a lot of equipment on their backs, and he [Russell] was pretty miserable. He started writing as soon as he left Greenville, and I wondered sometimes if things had been different and there had not been a war he might have remained indifferent as he had sometimes been when we were in Greenville. The war had a way of making us all feel different. The future was so indefinite and things were changing so, and I think most of the boys were trying to cling to some sort of security back home. 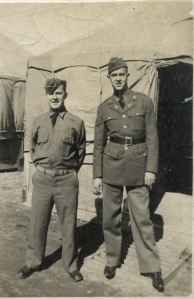 “He went on to maneuvers in Louisiana and then was put in the medical department of the 160th Field Artillery of the 45th Division, and sent to Fort Bliss in El Paso to train at William Beaumont Hospital. 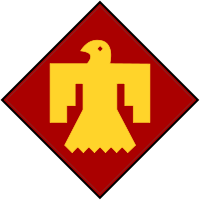 He got a few furloughs home but was always more unhappy when he had to go back and never knew when they would be going overseas. They trained for all kinds of climates and rumors ran wild as to where they would be going overseas. On one of his furloughs we were sitting at a drive-in restaurant when he proposed and decided we should get married before he went back. I was only 20 and could not see getting married and not knowing when he might leave or how long he might be gone. 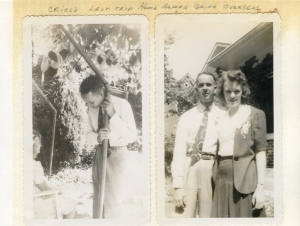 Russell with Tricia and Sara, just before being sent overseas

“From Camp Barkley, Texas, the division moved by train to Fort Devens, Massachusetts in 1942. It was while they were receiving intensive training for overseas duty. They tried to teach those who could not swim to swim at Cape Cod, but there was one major and Russell who never learned. He still didn’t get out of making amphibious landings in water up to neck though.

“From Fort Devens, they were sent to Pine Camp, New York, where the temperature went to 42 degrees below 0. 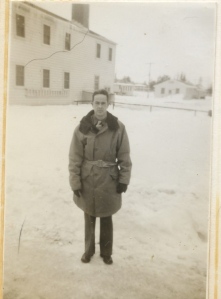 Russell on Christmas Day, 1942, at Pine Camp, NY. This is not natural for a Mississippi Delta boy.

They spent Christmas there in 1942 and moved to Camp Pickett, Virginia, in the spring to prepare to embark for Europe. On June 5, they sailed from Norfolk, Virginia to Africa and on to the invasion of Sicily in August.

“He was terribly homesick and hated the army and wrote nearly every day. His division had 511 days of combat, the most of any division in the European theatre. They made the invasions of Sicily, Salerno, Anzio, Southern France and on into Germany.”

I think Sara made the right decision in not accepting Russell’s proposal at that drive-in in 1941. After all, she had known him for only a few months and he might never make it back from the war. But can you imagine how forlorn he was as he climbed back on that bus for the long ride to Texas? He was leaving behind a very attractive, vivacious young lady who had plenty of opportunities for companionship, and who knew how long she would wait? But she did wait, through four long years of terrifying headlines and uncertainty and fear. I simply can’t read the letters that this kind, gentle man wrote to Sara from North Africa, Italy and Germany as his 45th Division suffered through 511 days of combat hell. He was my emotional rock all my life, and I can’t yet deal with the despair and loneliness that radiates off those pages. Someday I will turn from Sara’s life story to Russell’s, but for now I’m just grateful that this tale has a happy ending, even if that sad soldier couldn’t see it coming.

9 Responses to Gone for a Soldier